"Little Women and Werewolves" and the Retelling of Classics. 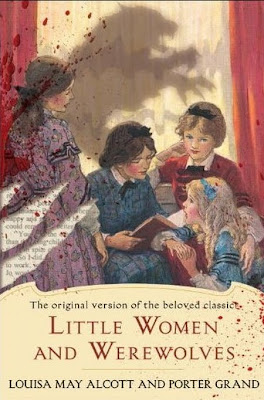 When "Pride and Prejudice and Zombies" first came out, I was simultaneously horrified and intrigued. I heartily dislike the horror genre, but I adore a good parody and was delighted by the idea of Lizzy Bennet going around fighting evil with a katana.
Granted, the idea has merit. A good parody can bring both laughter and new insight to an enjoyment of an old favorite. That's part of why I enjoy seeing classics in new time periods, or fairy-tales retold, or why one of my favorite musicals is "Kiss Me Kate."
However a poorly done parody/retelling is at best a farce and at worst a travesty and an outrage.
I picked up "Sense and Sensibility and Sea Monsters" first, feeling that would be less creepy to begin with as it didn't have Zombies in the title. I got about halfway through and was amused at some bits, but overall ended up being too bored to continue. The book relied entirely upon its shocking premise, and reduced Austen's wonderful characters to one-dimensional cardboard cutouts.
"Pride and Prejudice and Zombies" got off to an even poorer start. When I saw Lizzy Bennet reduced to a mere shadow of her brilliant self, I set aside the book in disgust. What's the point of retelling a story if you don't respect the original themes? Why use a character like Lizzy if you don't intend to actually use her? She has so much potential to make a story come alive, but these days people don't use her (or poor Darcy) for much other than selling power.
"Android Karenina" looked like it was heading in a slightly more interesting direction, but I have not yet mastered the ability to follow the complicated cast and naming systems of Russian novels and the introduction of robots called by number names only made the confusion worse. I gave that up too.
So after three strikes out, why did I even bother to pick up "Little Women and Werewolves?" #1 because our Borders was closing and everything was $1.99, #2 because the cover was kind of cool, and #3 because I was in a Little Women mode.
Now it need hardly be said that I'm a bit of a Little Woman buff. I've read the book countless times and adapted the first part of it for a film when I was in highschool. Needless to say, give me an adapted/abridged version and I can just about tell you which sentences were changed from the original novel.
I was prepared to be lax in my expectations and read the novel solely for amusement. However it became hard to sustain that amusement when the local werewolves started -- very graphically -- ripping apart their victims. And when I say graphic, I mean graphic. It was blood and gore in minute scientific detail.
Things went from bad to worse as Jo was revealed to be in love with Laurie, (who, along with his grandfather was a werewolf), Mr. March and Beth were both written not as dear and wise people, but as ones who are slightly addled in the head, and... (wait for it) Mr. March turned into a werewolf.
The crowning horrors were when Beth basically committed suicide and Amy allowed Laurie to turn her into a werewolf. And let's not even get into the absurdity of having Jo criticized for writing sensationalist stories when she is the heroine of an intensely sensational story!
The only thing that even begins to work in this adaptation is the creation of the werewolf hunting "Brigade." This is clearly a reference to the Klu Klux Klan and is part of the books message on tolerance (accepting werewolves). However I found this ultimately racist and disturbing. Werewolves in this mythology absolutely must consume human flesh or they will die. The Marches befriend werewolves under the thought that "other than one night a month they are just like us."
People of other skin colors than us do NOT go around killing under the guise of madness every month. That comparison is offensive.
Jo March and her family would never rationalize killing of any sort.
By all means, turn your leading man into a werewolf. But don't have him in any way still rationalize his acts of murder by the end of the book. Find a cure, or have him flee human society, or lock himself up every month or... something. There are plenty of ways to write a story that is accurate to the original characters and upholds basic human morality within the horror genre.
Unfortunately, that art seems to be entirely lost in this generation of writers.
I almost never post a review this scathing, but this book horrified me so much that I couldn't not post a warning. I plan to take my copy to the nearest Half Price Books and see if I can exchange it for something more worthwhile.
Posted by Elizabeth Amy Hajek at 5:35 PM

Wow, talk about a ridiculous book! Thanks for the warning...

I will have to admit I did read Pride, Prejudice, and Zombies and somewhat enjoyed it with limitations. However the other horror adaptations, never appealed to me and now I your word that they aren't worth reading.

Thank you so much for posting this! That books sounds awful. I'm a huge Little Women fan, so the thought of someone messing with it (like that!) is quite disagreeable. ;-) I will definitely be on the look-out for it.

I thought this was a joke mock-up when I first saw the picture of the cover here. When are they going to stop pounding this idiotic bad joke into the ground? The PP and Zombies was a funny concept--mostly for the gruesome-silly cover. The rest are just dumb.

And good, original books can't get reads from agents! This makes me sad.

But thanks for wading through this crap and confirming our worst fears.

I liked this book, and its being "awful" is only your opinion. FYI: the KKK didn't exist during the civil war, so I don't think that was the parallel the author was trying to draw. I think the reference was to human nature. You totally plumped up your own expectations before starting the book, and then trashed the book when they weren't met. I also thought the "gore" was beautifully written. I read something that this book was written the way Grand thought Alcott would have written it, and since she did write mysteries and murder stories that she had a hard time publishing, I think Alcott would approve. Much more than Austen if she saw what had been done to her books.

Opps! You're right, the KKK was started after the war. My bad! I think the parallels (a group to hunt down and secretly bring 'justice' to a racially inferior group) are still pretty stark though.

As for trashing the book for not meeting my expectations... might I ask if you read my whole blog post? I think I made it pretty clear that I had very low expectations going in.

I'm an English Lit major and have studied this period and Alcott to some extent (including making a film of the first book). My problem is that one of Alcott's main points in the original "Little Women" was that sensationalist stories with gore, sexuality, etc, were detrimental to society. So that's why it seems to me that this explicit (and I think you would agree the gore is quite graphic even if you like that style) and sensual novel is going directly against Alcott's own published views in the original.

Apparently we have very different views on Alcott and horror novels. I wrote this review to warn other like-minded readers, whom I happen to know frequent my blog.

I rarely write such scathing reviews because I know how much it hurts to read such a review of a book you love. However I genuinely felt (and still feel) that there needs to be a published warning of just how graphic this book is. I wouldn't have written such a review if I thought at all otherwise.