After so many tragic things on the news over the past few years, what a blessing it was for there to be a global event that was a celebration. We can share happiness as well as tears. :)
~ My Last Facebook Status on the Wedding

Just so excited to be watching all of this right now... been waiting for something on this scale ever since I first fell in love with England at the age of 11.... :) :) :)

The Royal Wedding didn't have the same meaning for everyone. It even made some people mad. But for those of us who have studied and loved English history for years, yesterday was a special chance to be a part of that which we've loved for so long.
When I was a pre-teen I fell head over heels in love with the British Monarchy. I've never thought it was perfect, but it fascinates me. Sometimes it's easy to forget that these are normal people born into an extraordinary life. I don't mean a fairy-tale life, I mean a high profile life that requires daily public appearances even age the age of 85 (which the Queen just reached). I don't think the average person can even begin to comprehend what it means to have your life regulated and watched in that way. And then the speculation and media attention has taken it's toll on marriages and Princess Diana's life.
It's not a fairy tale. And it's precisely because it's not a fairy tale that yesterday meant so much. I am happy that these people who go through so much -- out of duty and public service (NOT out of a desire for power but because they believe it is their duty by birth) -- could have a day of happiness.
I'm a die-hard romantic. I ask every couple I know how they first met. I squeal when my friends get engaged. And I am so happy that Will, who lost his mother so tragically at such a young age, and Kate, who waited 8 long years for her Prince (the press called her "waity-Katie"), are at last together.
And besides all that, I've actually walked down the center aisle of the Abbey with my own father, just after the 2005 Palm Sunday service. That really brings the whole event that much closer to home.
The truth? I got misty-eyed when Kate arrived at the Abbey. 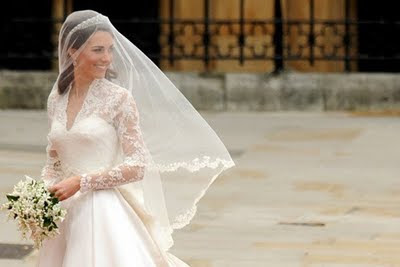 Those of us who watched live will probably never forget the moment when Kate slipped out of her hotel and we saw the first glimpses of her dress. She and her staff did a marvelous job of keeping even the name of the designer a dead secret. All we knew beforehand was that the dress would be white, and (keeping with Westminster Abbey rules) would have covered shoulders.
Expectations were high due to Kate's reputation of being a classy dresser, but there were many audible gasps when she first emerged. Her dress was beautifully exquisite. Feminine and (all things said and done) modest. I was absolutely blown away. (And more than a little impressed when I heard the details of the handsewn embroidery!)
Her tiara was special too. Some speculated she would wear Diana's bridal tiara, but Kate instead went with a tiara formerly belonging to Dowager Queen Elizabeth (deceased mother of the current Queen). I thought this was special as the Queen Mum was an important part of the royal family for the better part of a century and only recently passed away. What a lovely way to honor her memory and make her a part of this day as well. 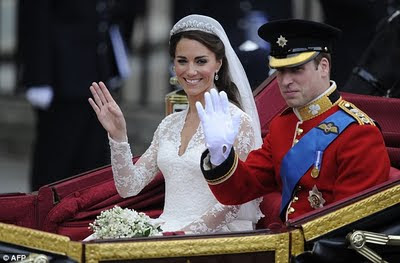 William's uniform was carefully chosen as well. He wore the red of the Irish Guard, honoring the recent losses that division had experienced in Afghanistan. 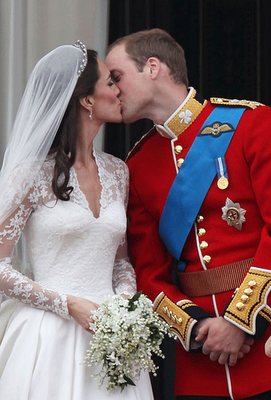 Abbey protocol prohibited any kisses under the Abbey roof, so Kate and Wills shared their first public kiss of married life on the balcony of Buckingham Palace about an hour and a half after the ceremony ended. 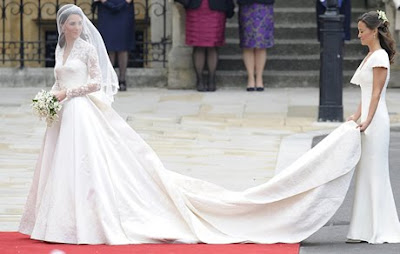 The Wedding service, which was Traditional Church of England, was beautiful and meaningful. I was especially moved by the vows and am halfway considering using this marriage service in my own wedding (whenever that may be). I also really loved the homily, which was short and poignant. 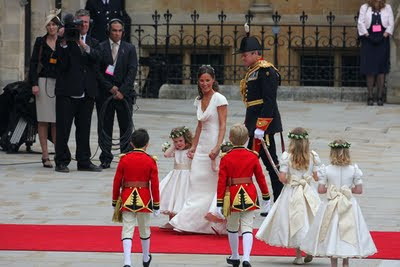 Pippa Middleton served as her sister's maid of honor, and took charge of the adorable younger bridesmaids. It was so sweet to see her tending to the little flock of children! 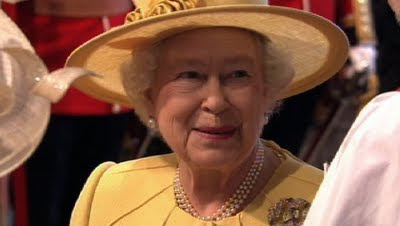 The queen looked lovely in canary yellow, accompanied by her husband the Duke of Edinburgh. Queen Elizabeth just celebrated her 85th birthday and the Duke is 90. What a blessing for them to attend the wedding of their eldest grandson to such a lovely young lady! After all the trauma and drama of the past few decades, it must be very reassuring for the queen to see the level-headed Kate as her grandson's choice for future queen. 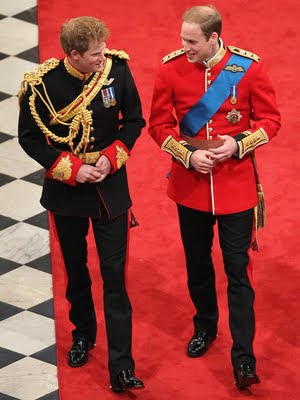 Roguish grinning Prince Harry was his brother's best man. It was lovely to see these very close brothers walk down the aisle together. 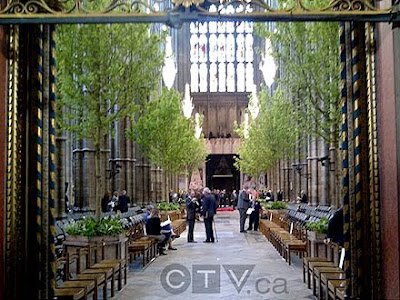 OMG they really decked out the Abbey... was not expecting to see that much greenery inside! (Or that much light... it was much darker when I was in there!)

Westminster was gorgeous, decked out with real trees to stimulate a country garden. 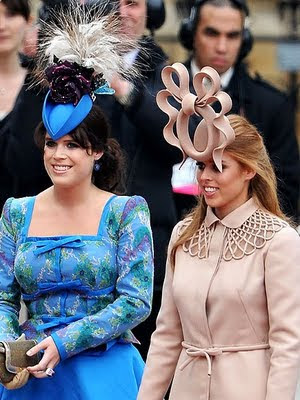 There were many gorgeous guests in attendance as well. And while I think Princesses Beatrice and Eugenie (daughters of Queen Elizabeth's second son, Andrew) are lovely, their clothing style is downright terrifying. I have extreme sympathy for the girls and wonder WHAT their stylist was thinking? 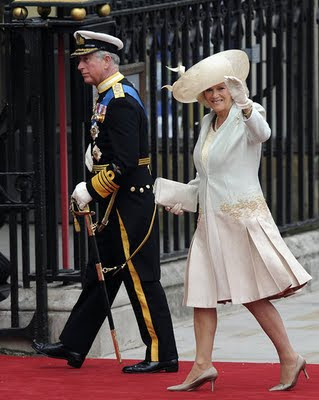 Prince Charles and Camilla looked lovely as well. For all they've gone through, their marriage seems to have settled into a quiet and respectful relationship, strongly blessed by Charles's sons. I understand Camilla's steadfast determination to respect Diana and quietly go about her royal duties has begun to really raise her popularity in the eyes of the British people. Anyhow, she looks quite lovely and elegant here, and certainly knows how to properly smile! 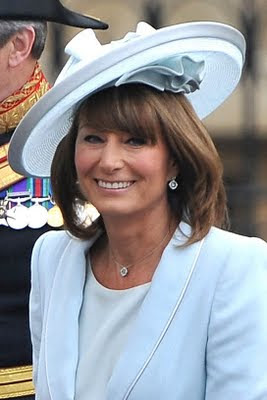 It's easy to see where Kate got her good looks! Her mother, Carole Middleton, was a graceful picture of mature beauty and just beaming with happiness. 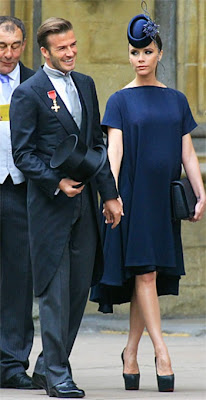 And of course we could hardly forget the gorgeous David and Victoria Beckham! In fact, Victoria is so well dressed that I didn't even realize she was sporting a baby bump until a news report pointed it out!!! Boy do I feel silly...
One thing I'd like to point out. Some people have raised concerns about the money spent on the wedding. While I can't find an exact cost, it seems to be definitely under $50M. Now while that may sound like a lot, I need to say that this is less than half of the price tag for the typical Hollywood blockbuster. And provided a lot longer entertainment, joy and sense of unity to a much larger audience than the normal film. I've got no problem with going to see the immensely more expensive (and far less important) "Thor" next week, so I'm definitely not going to make a fuss about the cost of the wedding.
The wedding was magical, and I am so thankful that the technology of today allows even a couchbound American with a migraine to share the excitement and joy of the occasion.
Posted by Elizabeth Amy Hajek at 1:22 PM

Now I wish I had gotten up at 4am to see it. Although that one hat (the pale one that looks like a bow) makes me chortle so hard. Great review on the wedding Elizabeth. :D

According to TLC the cost was about 23M, and a good chunk of that included security.

Amanda, yeah all the different articles google brought me to referenced a different figure. The only definite information I felt I could post was that it was certainly under $50M.

While this is certainly an expensive thing, its not like 23M just disappeared into thin air. It went to pay hard working people for everything from picking flowers to security.

I heard on the news that the greenery and flowers alone in the Abbey came to $100,000. EEEPS!

And I looooooved Kate's dress. So elegant.

Isaac --- thanks for reminding me! I forgot to make that point as well. The wedding has also been really good for Britain's economy. :)