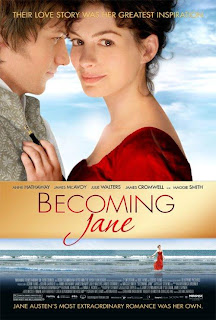 I have been asked by several members on the Fairy Tale Forum (which I administer) to post a review of "Becoming Jane" now that it has been released to DVD and I have been able to see it with subtitles.

Well, first of all, I will say that if you would like a complete list of anything that might be objectionable, please check out the Plugged In Online review. I will discuss objectionable elements in my reviews, but because my level of sensetivity may not be the same as my readers, my advice will always be to get the complete listing from www.pluggedinonline.com if that is something that concerns you.

Also, be forwared. The following review may contain spoilers.

Becoming Jane, this year's film addition to our growing choices of Austen-related movies, focuses on the early years of Jane herself.

It is important to be aware from the first that this is a young Jane. Many people have been appalled by some "themetic" elements that have been included that they feel is an affront to the author. While there are two very short scenes that have some dialogue/images I wish had not been included (so that I might share this film with my younger sister), I must say that I do not think they are completely a disgrace to Jane.

Why? Firstly because Jane does respond to this kind of material in the proper, moral way that we would expect her to. Secondly- because such topics did exist in those days, as they do now. Furthermore, England had not yet reached the restrictive stage of the Victorian era- a fact that I think many "Janettes" tend to forget. Jane was a well brought up pastor's daughter, but that does NOT mean that she was never exposed to immoral ideals. In fact, what truely makes a person moral is the knowledge that immorality does exist, but remaining moral despite that. Without temptation, how could we ever claim victory?

The second charge brought against this film is that Jane's relationship with Tom Lefroy is completely fictionous and imagined.

For three interesting articles on what we know concerning their relationship, click here and scroll down to the bottom of the page. The first three articles are the ones to read.

The answer is "no" because we have hardly any evidence that there was every any romantic relationship between Jane and Tom.

Yet the answer is also "yes" because a) we do not have all the letters Jane sent to Cassandra (a fact the movie deals with by Jane asking Cassandra to burn the letter in which she reveals her feelings for Tom) and b) because there is evidence in the letters to suggest, at least, that Jane liked Tom very much.

The third answer is that it doesn't really matter. The filmmakers were playing around with an "what-if" theory, rather than doing a straight "bi0-pic." And as long as they represent Jane's character faithfully, I have no problem supporting this film. I think my biggest question would be...would Jane ever really begin an elopement with anyone? Well, she was a very independant-minded lady and she was young (only twenty).

Now- how does the film itself hold up- simply as a film? (And leaving all questions of historical accuracy out of the picture.)

The answer is- fairly well. It still lacks some of the sweetness and grace that made 2005's Pride and Prejudice such a delight to watch, but it is a fairly well-made film. When I saw it in the theatres, I thought the cinematography was rather shaky and "in-your-face" but it was much more enjoyable on a small screen and I was better able to appreciate the shots.

It also has a more realistic feel- if that is possible. It does decide to deal with some very earthy issues- besides the moral ones already confronted, Jane's brother has a mental illness, her family is forced to dig their own potatoes and feed their own pigs, and (Spoiler) Jane's almost-brother-in-law dies overseas, leaving her sister completely devestated.

Yet there is also humor, and family devotion. And, without any doubt, there are frequent mentions of characters and ideas that end up in Jane's later books.

For an instance- an elderly dowager mentions a "pretty wildness" by Jane's house- upon which Jane immediatly rushes to her writing tablet and jots the words down- which will later be spoken by Lady Catherine in P&P.

Jane suffers her own Mr.Collins/Mr. Elton proposal from her brother's friend Mr. Warren.

And- though some may find the sight of Jane Austen playing cricket a bit too "feminist" for their liking, a former Jane Austen Society president points out on the special features that one of Jane's heroines, Catherine Morland (of Northanger Abbey) was quite fond of cricket.

She also finds the same sort of disgust towards Tom Lefroy that Elizabeth Bennet has towards Mr. Darcy. But although her relationship with Tom serves as a catalyst for the beginning of her most fameous novel, Tom is a great deal more human (read "flawed") than Mr. Darcy, and also a great deal more interesting (read "funny") to watch. (And he is, after all, played by rising star James MacAvoy.)

But the connection that I saw come through most strongly was the relationship between Jane and her sister Cassandra. If Jane is Lizzy Bennet, than Cassandra is Jane Bennet. Their hair colors even match the colors given to those heroines in both the 1995 and 2005 versions of the film! (Brown and gold). The bond between these sisters is so sweet, strong and loving. One cannot help but see Lizzy and Jane Bennet in them- a parallel which Jane herself draws when she tells her sisters of the marvelous marriages she is giving them- though both she and Cassandra have recently seen their hopes for marriage dashed.

Artistically the film is also lovely. Very real- nothing fancy or gilded about it. There is definetly earth and mud aplenty. But there are also fountains and gardens and beautiful forests. Not to mention lovely scenes of Jane writing...(why don't we encourage that kind of handwriting any more?)

The costuming is also well-done. Like 2005's P&P the transition period of the late 1700's is clearly shown. Some characters (such as Jane) wear the new, high-waisted dresses, but many of them also wear the traditional lower waists and longer sleeves of the colonial era. Furthermore, though I was originally annoyed by the darker, richer colors that Jane wears at home, the filmmakers explained that lighter colors were a sign of wealth, since they showed dirt and were impractical for household chores. Since Jane's family is poor, it makes perfect sense that she would wear darker more practical colors while at home.

And I must admit that I have a certain weakness for the long, elegant coats that the men wear...so dashing!!!

And that, in short, is my very long, very opinionated review of "Becoming Jane." No doubt there shall be several die-hard Janettes that disagree with me, but we are all entitled to our own opinions in this world, are we not?
Posted by Elenatintil at 10:03 AM

Well dear, you know I didn't like the movie very much--even with the undeniably attractive James McAvoy. I won't deny that the costumes and the acting were pretty good. The cinematography made me sick in the theater, so i hope it was better on the small screen. (I'm pretty sure they were trying to get the beautiful effects of the long shots in the 05 version, but it didn't work.) I'm not going to pretend that I am an authority on Austen, (I read one book and saw most of the film versions), but I thought it was kind of a neutral film. It wasn't needed, but some people liked it, so why not :) I think I would have liked the story had it been presented in a different way. I felt that it was a script with a lot of potholes. The continutity to me was glaringly missing. Bio-films run the risk of this, however. All in all, it had some nice elements, but I don't feel the need to see it again.

Hmmm...well I own it, so if you ever want to borrow it out of sheer boredom, let me know. The cinematography was not at all nauseating on the small screen. And the special features are interesting...the documentry sheds a lot of light on some of their choices.

My friend went to go see it with her mom, and she said they nearly walked out on it. I haven't seen the movie, but why would there be something innappropriate in a Jane Austen film? Because, one thing I particularly enjoyed about S&S is that it was CLEAN. lol It is is rare to find something known as a 'clean' romance. Aragorn/Arwen and Faramir/Eowyn anyone? *chuckles*

There are definetly about three things I would have taken out of it. I think they should have rated it PG-13 at least. Not so much because it needed to be PG-13, but then because people would have been more prepared for what they were going into. I definetely appreciated it more after watching the documentry.

I enjoyed the movie but I agree it should have been pg13. I was nto expecting the nudity that popped up.

I've seen it an loved it. But I do agree that there were some "interesting" elements...

Nope, I own the DVD and it's PG. I'm glad you liked it though!