Harry Potter and the Half-Blood Prince

Harry Potter and the Half-Blood Prince...

It almost feels too soon to begin commenting on it. I'm not a fan of snap judgements on films, because their strength often comes from how you view them the second or third time. Do they grow stale, or richer? (Why does that make me think of dried out cake and tangy feta cheese? Oh well...)

My initial overall response, without having seen it with subtitles (and therefore only hearing parts of the dialogue) is that I really liked it. Or rather, I was incredibly impressed by what they managed to do with it. I know there are going to be parts of it that bother some people, but I felt that overall it was a masterful film.

This is the first Potter film that I have been able to see in theatre, and that alone was an exciting experience. Seeing the main title whoosh over your head is really quite impressive the first time you see it. I don't care how late I am in saying that, it's still true. And overall, this is a film worth seeing on the big screen. Even if you are only a nominal Potter fan, it is technically so well done that most film buffs should be able to enjoy it.

And because I haven't seen the subtitles yet, it was the technical aspects of the film that really stood out to me. There were just so many bits and pieces that were very strong. Artistically it is phenomenal, and the acting is a step up all around.

Particularily deserving a mention is Tom Felton, for his portrayal of Draco Malfoy. I wouldn't be half-surprised if talk started about an Oscar nomination for supporting actor, he was that good. Kudos to director and screenwriter for their decisions on how to show Draco's inner struggle. He was seriously in danger of upstaging Harry at times.

Other fine acting comes from Michael Gambon (who really IS Dumbledore by now, no matter how much we liked Richard Harris) and Jim Broadbent. I must say, I was not expecting such a fine treatment of the Horace Slughorn character. Very, very well done.

I was also happy to see Emma Watson's acting stepping up from the last film, in which I thought she fell rather flat. The heartbreak on her side as she watches Ron make out with Lavender Brown is really quite emotionally moving.

Some may call this (and I've already seen them do so) soap operatic in its exploration of the romance bubbling around Hogwarts this year. But as someone who is only a few years past the intrigues of high school relationship, I felt it rang very true. Teen romance is almost never clear cut and painless, and the film is right to show this. Part of what makes Harry Potter universal is Rowlings ability to accurately portray all the aspects of Harry's journey to adulthood, and the romantic side is no less important that his battles with Voldemort.

Another thing I was pleased with was director Yates decision to show us a wider picture of Hogwarts than we have previously seen. He recognizes that the trio will not be returning to school in the next film, and so in many ways, this is our farewell to our beloved castle. Though it will make an appearance at the end of movie #8, it will be in a very differant vein and there will not be time to dwell on things the way there is in #6. I appreciate this. 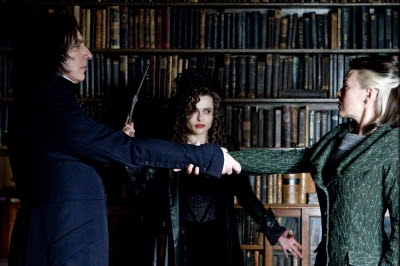 All this is not to say that I believe this is the perfect movie. Like any well-beloved book, it was an enormous task to adapt and there is no possible way that everyone will be happy with it. I have a few personal pet peeves...Narcissa Malfoy was portrayed totally wrong...her conversation with Snape is supposed to be much more hysterical and pleading. This Narcissa was much too controlled.

Bellatrix Lestrange suffered some trivalization, and the Lupin/Tonks relationship is totally absent. Both are a loss that are felt and we could have done with less of some other aspects in order to dwell more on Lupin/Tonks. (Bellatrix just could have used some more impossing actions. Dancing in front of Hagrids burning hut trivalized her).

But I see another complaint coming from the loss of the battle at the end of the movie. Well I noticed that myself. I missed the addreneline-rushing swishes of light and the black and white smoke of dueling wizards.

However, as I thought about it, I realized that there was really no way they could give us a dramatic fight at the end of the movie without overshadowing [SPOILER] the death of Albus Dumbledore. [SPOILER OFF] It is a death that deserves attention, and a sober, rather than CGI-fest ending. I feel that, in this instance, the production was wise to give us more action earlier on in the film in order to reserve the end for reverance and reflection.

There are going to be 8 Potter films. #5 had a fantastic battle between the Death Eaters and the Order of the Phoenix that could not have been topped by the action that takes place in the book of #6. And in film #8 we will have the most epic battle ever seen in a Potter film, made all the more enjoyable because we haven't been overstuffed on action in #6.

So I feel of all the films, "Half-Blood Prince" is the one that can afford to sacrifice its end battle to the memory of one of the most important characters in the series.

I do wish they had seen fit to give Snape the chance to scream at Harry, as this is one of the only times we see him loose control in the entire series, it's a valuable moment. I'm guessing they felt it was too out of character for the Snape portrayed by Alan Rickman, as he has alwasy been more subtle and controlled than the Snape of the books.

Overall, as I said in the beginning of this post, I felt it was a well-done and worthwile film. Also, perhaps the most artistically excellent since Alfonso Cuaron's installent, and with a better screenplay adaptation than that one. If I were going to rate it, I would give it perhaps an 8 out of 10, bearing in mind that this could change when I see the film for the second time, with subtitles, sometime later this week.
Posted by Elenatintil at 12:23 PM

I agree with most of your parts......I liked Narcissa but she did seem really controlled.
I guess I like totally crazy Bellatrix as opposed to book Bellatrix but that's just me.
Slughorn was amazing, totally in character.
All in all it's my favorite so far....so we'll see what happens when the 7 and 8 come out.

I agree! I believe that Narcissa needed to be more uncontrolled, (plus i didn;t like that her hair was partly black) I personally didn't like Slughorn that mucch, i imagined him more pushy.
My favorite part of the movie was when harry had taken the Liquid Luck, he almost seemed drunk.

*happy dance* Go Draco, Go Malfoy! (he is my favorite character in the book, and I think felton did an excellent job portraying him.

felton did do an excellent job, one thing though was that they missed the whole fleur/bill relationship and there is supposed to be a wedding in move no. 7 also i did not understand the burning of the burrow

I very much agree with your thoughts on the movie, particularly in the case of Narcissa. Her hysterics at this point of course lead into her actions in the seventh book, and I feel that this portrayal will not lend as well to her and Lucius's characters in later movies. Personally I liked slughorn's portrayal too. I seemed to understand his character better after seeing the movie, and I thought the lily/fish story was a great addition. Thanks for the well-rounded review.

Thank you for taking the time to comment, Stella! It is comments like yours that keep me writing!