Celebrating and explaining DOCTOR WHO

I can't believe I've never written a post about THE DOCTOR before.

Of course, that COULD be because my Doctor Who obsession is fairly recent. In fact it only dates back to the beginning of this year. And even then I entered the fandom warily. I mean, creepy aliens have never been my thing. However I was won over by the awesomeness that is David Tennent.

*points to picture below* 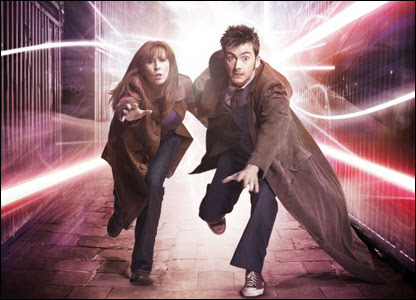 Look! David Tennent! Is he not awesome? Yes, I mean Christopher Eccleston had amazing chemistry with Rose and Matt Smith is doing a fair job but...

David Tennent! Really! How can you top that? It's no wonder that he has pushed Tom Baker out of the most-beloved-doctor-ever-slot!

Wait, are you telling me you don't actually know who DOCTOR WHO IS?!?!?!

(Well, no one does, because he's just "The Doctor" and we don't know any names beyond that but... that's besides the point.)

The Doctor is a Time Lord. He travels through time and space in his TARDIS (the blue police box in the pictures). Tardis stands for Time And Relative Dimension In Space. And guess what? It's bigger on the inside! Much bigger. There are rumors of a swimming pool...

Anyhow, The Doctor is over 900 years old. Like Yoda. Only he's not green and shriveled up like Yoda because Time Lords have this awesome regeneration power. If they get fatally wounded, they start glowing and shooting off energy and generate an entirely new body. Which is lovely because it keeps the show going, but is absolutely TERRIBLE because it meant the end of DAVID TENNENT'S DOCTOR!

(Sorry Matt Smith. You're doing a lovely job. Really. It's not your fault that you aren't Mr. Tennent)

Doctor Who is one of the oldest running Sci-Fy shows ever. It's being going on since the 60's, although it got dropped in the 90's. However they decided it reboot it back in 2005, which happened to be when I was in England. Guess who got to see gigantic posters for the show hanging up in London train stations?

Yeah, I did not realize how lucky I was (for an American). My Dad pointed it out to me and said "Your Uncle used to like that show back when in was out before."

And promptly forgot all about it. Until all of my friends and their siblings and the kids I nannied fell under the Doctor's spell. They tried to introduce me to it. They really did. But the Tom Baker episode was weird, and I'm sorry, but even Tennent could not overcome the horror of "The Voyage of the Damned."

But he WAS Tennent, after all, and I had to see more of him. So a friend lent me season #3 and I popped it in to watch the amazingness of "Smith and Jones."

I tell you, that Martha is one awesome gal. 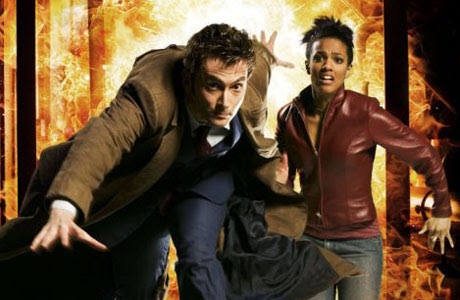 When the series restarted in 2005, they introduced the Ninth Doctor (Christopher Eccleston) and his companion Rose Tyler (Billie Piper). Rose was a nineteen-year-old girl working in a department store who got attacked by mannequins. Turns out the mannequins were controlled by aliens, whom the Doctor promptly dispatched. Rose thought "oh wow, fun cool guy who can kill aliens and has a spaceship. Sure, I'll travel with him!"

Great idea Rose. End of the world, cyberman attack, stuck in a parallel universe later, Rose finally had to leave. But not before she'd won the Doctor's heart.

(and yes, now we're talking about the TENTH DOCTOR played by... oh yeah, I don't need to say his name again, do I?) 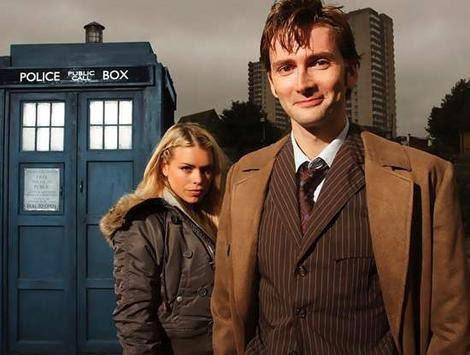 After Rose got stuck in the parallel universe, the Doctor met up with Martha, a med student whose hospital got teleported to "the bloody moon!" Martha also fell in love with the Doctor, but the doctor did not fall in love with her, which made for some interesting episodes as they visited Shakespeare, forgot not to Blink when they met the Weeping Angels, and bumped into THE MASTER. (Who is nearly as awesome as the Doctor, even if he was never played by David Tennent.)

But Martha realized her love was going to remain forever unrequited so she decided to be a strong independent woman and left of her own free will. GO MARTHA! (I was rooting for you, girl!)

So the Doctor was on his own again until he reunited with an old friend - Donna Noble (see first picture). Donna did NOT fall in love with the Doctor and was horrified by the very idea. She's the best temp in Chiswick and can type 100 words per minute - skills which actually save the universe more than once. Donna got to meet the Doctor's Daughter, Agatha Christie, and the mysterious River Song.

But then Executive Robert T. Davies left the show and all the actors decided to leave too. So the Doctor regenerated after one of the best specials ever and turned into Matt Smith.

Right now Matt Smith is traveling through Time and Space with his companion Amy Pond, who sadly has not gotten nearly the decent backstory that Rose, Martha and Donna got. Which might be why so far I really have not liked her as much. My apologies to Steven Moffat, but I think RTD was really better at the character creation, even if you do better with coming up with creepy premises (BLINK covers a lot of flaws).

Next season we get an episode written by Neil Gaiman. Can you say "excited beyond belief"?!?

There. You got to see me completely geek out over something. And go fangirl on you. Hope you enjoyed it because it's not going to happen often. ;)

I have plenty more thoughts on the franchise, which you can check out here!
Posted by Elizabeth Amy Hajek at 12:47 PM

Okay... so where do you recommend a person start watching? Old style or new?

Eh, I was so spoiled about Doctor Who I guess I don't even think about that for everyone else. But you can't complain - I didn't spoil anything you don't already know.

you spelt David's last name wrong-it's not tennEnt it's tennAnt