Belle due to join 'Once Upon a Time' 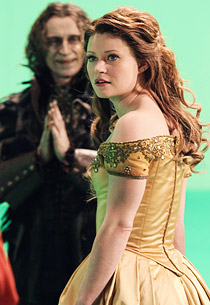 A few weeks ago they announced that the character of 'Belle' would be joining OUaT. Today the first picture was released and it looks fantastic! Unfortunately we won't be seeing her on our screens until Valentine's Day... still, that'll be a lovely way to celebrate the day! (And it's only the cream on top that this princess will be played by the beautiful and talented Emilie de Ravin)

We've also learned that Aladdin will be popping into the show as well, which I think is fantastic. So far we've only seen characters from western fairy tales, so I'm delighted to know that the show plans to branch out!

You can read the full story here: http://www.hypable.com/once-upon-a-time/2011/11/28/first-look-at-emilie-de-ravin-as-belle-in-once-upon-a-time-aladdin-appearance-confirmed/
Posted by Elizabeth Amy Hajek at 11:23 AM

I am loving this show, and am so excited about Bell, and very happy she's a brunette, I was a little worried when the actress they picked was a blond!
Ooo, Aladdin another favorite of mine! =)

My sister and I have been really enjoying this show and I am so exited for Aladin since he in one of my favorites!