OUAT gets back on track with "Best Laid Plans"

Part two of "Once Upon a Time"s season 4 started off shaky, coming after the controversial Frozen storyline, but it truly is getting better every episode... as we can clearly see with 4.17 "Best Laid Plans." 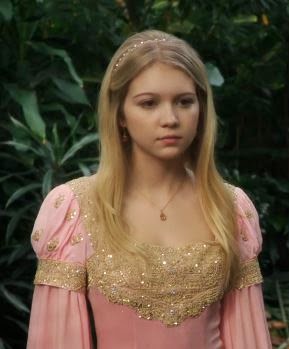 Who else wanted to see Emma as a spoiled royal teenager in a gorgeous dress? Okay, well I am never really asking for spoiled teenagers on any show, but it was a fun glimpse at both an alternate version of Emma and her wardrobe.

Big things were happening in last night's episode, with Snow and Charming going way past the line of "acceptable hero parenting"... and totally suffering the guilt of it. Man, who knew that Snow abducted a baby, filled her with her own baby's potential for evil and shipped her off to another universe?

Well, the author did. And here we're running deeper into this season's theme. Everyone is supposed to be born with the potential for both good and evil and the free will to choose their own path. The author, however, is tampering with that, which resulted in banishment into a book... (more on that in a moment).

So we're left asking "how much of Snow and Charming's actions in this season's flashbacks are their own? Were they being controlled by the author when they abducted Lily? We knew the Sorcerer was being controlled, but were our favorite royals?

How does one get chosen for the post of author anyhow? We know it started with a man named Walt (cue the 'D'awws'), but did he choose his successor or is there some tribunal of author choosing? How did such an unscrupulous person as the current author (played by another LOST alumni, Patrick Fischler) get selected for such an important post?

It seems my desire for a "true" villain has been granted, with the Author being set up to be the actual 'big bad' of the season. This explains why the queens of darkness have been treated so sympathetically so far... it was all a great big red herring to cover up what was really coming!

It was great to see Henry contributing something substantial this week, very awesome to see Snow making choices for Regina's good, excellent to see Snow and Charming come clean to Emma, and great to have the fan theory about the identity of Maleficent's daughter be confirmed! (Yep, Maleficent and Snow's daughter were BFFs in high school. Didn't see THAT one coming, did you? Okay, all of tumblr did, but you know what I mean. Fun canon changes.)

I also really appreciated getting a very simple but solid explanation of how Cruella and Ursula got into our world... but outside of Storybrooke.

Still no Robin Hood return, (last week was too cruel of a tease), but we're due to get some Cruella backstory next episode!

I might be remembering it wrong but I thought August said that the Sorcerer (and the apprentice?) choose the Author. I thought this was one of the things August mentioned when he was saying that the Author is a job more than a person, that there have been multiple Authors.