Han and Leia - The Bickering Couple Grows Up

I FINALLY got to see "The Force Awakens" (movie theaters give me migraines so had to wait for DVD release) and it's time to write about it. (Spoilers to come.)

When I was a little girl, there were two love stories I really fell for, hard. #1 was Robin Hood and Maid Marian. #2 was Han Solo and Princess Leia.

7 year old me was obsessed with Han and Leia. I had the action figures (man, it was SO hard to find them!) and loved making up post-movie adventures for them. I didn't read much of the EU stuff because the one I did read didn't do them justice, but I loved knowing that they eventually got married and had kids together.

(When I grew up I read "The Courtship of Princess Leia" which was one of the most horribly written pieces of ridiculousness I've ever encountered. So glad I never ran across that in my childhood.)

As I grew older and encountered other couples, I was definitely drawn towards the bicking couple stereotype - from Elizabeth and Darcy in "Pride and Prejudice", to Beatrice and Benedick in "Much Ado About Nothing." (And, come to think of it, Robin and Marian in the Errol Flynn version have a quarreling couple vibe too!). There's just something about the chemistry in those couples that is electric to watch.

The problem is that, in real life the quarreling couple does not succeed unless they grow, mature, and learn to pull together rather than apart. Elizabeth and Darcy's whole story is not about being a quarreling couple, but about overcoming that which makes them quarrel. I fully expect Darcy and Elizabeth's marriage to last because it is rooted in character growth, not chemistry.

But Han and Leia?

Since I couldn't see Episode VII in theaters, my husband and I decided to read all the spoilers right away. We felt it would be better to have control over spoiling ourselves, rather than let one secret after another leak in over the next four months. This was absolutely the right move - the characters were so funny and fresh and solid that the film was charming and wonderful even though I knew all the plot twists.

This also gave me four months to adjust to two big facts:

To deal with the second issue first - this I fully expected. My RPG group can verify that I was strongly predicting before the movie aired that Han Solo would get killed off at some point in the trilogy. It was Harrison Ford's 3 decade long wish for the character, and although his death was extremely sad, when I actually watched it I mostly just felt "Ford finally got his wish." And I have peace with that.

I was more nervous about Han and Leia. How could this couple I had loved so dearly for so long be BROKEN UP??? What would their scenes be like? How could it possibly not sour my love of the original trilogy? 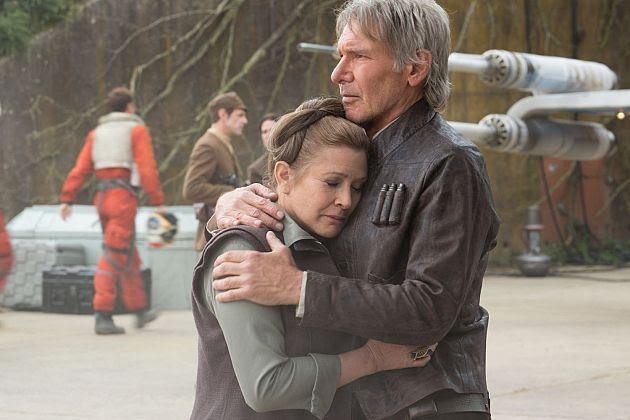 But, you know, when I actually watched it... it felt right. They love each other, that much is very very clear. But they are pulling two different carts in different directions. Leia's first passion always is the Rebellion. It's a cause her adopted family died for, it's a cause she is good at and integral to. Han's greatest passion is winning - the higher the odds the greater the high for him. He loves Leia, but he's never going to be first in her life.

I think he was first for awhile. Obviously they married and they had at least one child - and that ended in tragedy. Even good marriages are shaken by tragedy, and the death of a child is a significant risk factor for parental divorce. Ben didn't die (yet), but in some ways his turn to the dark side could be seen as worse than death, and it makes tremendous sense that, already wrestling with different (and sometimes competing priorities) this would cause Han and Leia to separate.

Just as their marriage was never clearly stated in the film, neither was their divorce (let me know if I missed a key word somehow). This too I felt was realistic, and honoring of the original relationship.

I mourn how it ended, but in many ways it makes a great deal of sense to me, and I appreciate the sense of realism despite the high romance elements of the story. It's not that Han and Leia couldn't have worked through their issues, is that with all of those elements in play (and a story to tell!) it makes a great deal of sense that they never got over the hump, particularly after Ben's defection.

I will always love Han and Leia, and in the end I appreciate that they gave us a 'true' story, rather than a rosy one.

(For the record, my husband and I have always been the exact opposite of a bickering couple. Funny how those things work out. But we're still going to cosplay Han and Leia someday.)
Posted by Elizabeth Amy Hajek at 9:33 AM

Yay! You finally got to see The Force Awakens!!!! I love that movie, and I really loved the scenes with Han and Leia. They were bittersweet, but very touching, and the love between Han and Leia was so beautiful. I also really loved seeing Han reach out to Ben to try and get him to come home. So much great stuff in this movie!

Thanks for giving a nice counterview to my own thoughts on this movie. For personal reasons, I was really upset with how Leia and Han's relationship was resolved. I come from a broken home, and after reading about what J.J. Abrams originally intended for the film--that he would have the two of them get back together after talking out things--it made me even more upset. There seems to be a prevailing idea in our society that, when life gets tough, walk away. For me, having watched people walk away in real life, I wanted a positive, encouraging message for couples and families to fight for the ones they love, even if it would take work. I don't really know of any examples in mainstream media of such occurrences, but I think these examples are NEEDED, perhaps as much, if not more so, than strong feminist examples for girls. Because we as humans have to learn to fight for each other.

I dunno, those are just my thoughts. I'm glad you enjoyed the movie! :D

Actually I agree with you. This might sound funny after my review, but I also believe that we give up too easily in this day and age. Personally I would have wished for Han and Leia to work things out, and if I were writing the film, that is what I would have done. Marriage is work!!!

My coming to terms with the film relies on a more subtle message, which is that we find the bickering couple sexy, so that is what we seek out in a partner, which makes a rocky foundation for a marriage. I appreciated Han and Leia's example as a cautionary tale - yes the chemistry might be there, but will such a couple work in the long run? I think we need more stories showing the results of an initial pairing.

One of the things I really appreciate about the show "Firefly" is the relationship between married couple, Wash and Zoe. They don't have the fire and snap of Mal and Inara, but you KNOW that Wash and Zoe are the deep, true love that will last forever. Star Wars doesn't have the time to delve into that, and so I find myself grateful that they didn't continue the myth of "sexy sparks makes love that will last forever." Hard work does - but they didn't have the time to show that Han and Leia would have had to work really REALLY hard at their marriage.

I glad that 7-year-old girls today might stop and think 'huh, so that's NOT the way to find true love?' rather than falling for the first charming scoundrel that comes their way - BUT I hope for more stories that show how to grow a marriage, despite obstacles too.

Anyhow I really appreciate your comments and perspective. Thanks for chiming in (and so respectfully too!)