Someday - A Fictionalized Account of the 272 Kidnapped Nigerian Schoolgirls 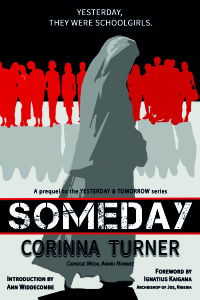 Because it's based on a true story, and it's something that is still ongoing and needs awareness, prayers, and help. It's a horrible thing that you can do something tangible about - but it's not going to be easy to read. Let me tell you a bit more about it, and then I'll give a content age-guess.

If you're attuned to the news, you'll remember when 272 Nigerian schoolgirls were kidnapped on April 14th, 2014. It was a horrifying story, and the saddest part is that the majority of them remain in captivity.

British author Corinna Turner was deeply impacted by the story and felt convicted to write about the situation. She chose to move the setting to England, so that the true horror of the atrocity might be more readily felt and understood by Western readers.

And gripping it is. I was given the chance to assist in vetting the novella for American readers (identifying British phrases that might not make sense to American readers), and I simply raced through the story. I had to. It is intense and important - and horrible. Really, really horrible things happen to these girls, and Turner has such a strong grasp of character that you feel intensely for each and every person. The only way I could handle the depth of emotion was to get through it as quickly as possible.

The novella construction is interesting - it is entirely first person perspective, but has over a dozen viewpoint characters. This gives it enormous power and is a very effective device - but takes a bit of getting used to. The characters are well drawn and distinct, with a wide range of viewpoints. (Turner and several of her main characters are Catholic, but there are also Protestants, Muslims, Atheists and a Shintoist).

This is such an important book, but I must strongly caution sensitive readers. There is a lot of violence, all inflicted on girls aged 14-18. Several graphic deaths take place in the first person. Most sexual violence is discreetly described or happens offscreen, but the details are all too easy to imagine, very vividly.

Turner does a very good job of interspacing the darkness of the experience of the kidnapped girls with the hope and efforts of the searchers and rescuers - (many experiences are actually based in true stories) - but one cannot escape the fact that, although this is a fictionalized account, it is not sensationalized. These horrors are true. Most of the schoolgirls are still missing, and their true stories (as far as we have discovered) are relayed through news articles in the back of the book.

I read a lot, and very little moves me to tears. I broke down weeping at the climax.

The profits from this book go to Aid the Church in Need. So even as you read the horrors unfold, you will know that you have already contributed towards the cause.

Just yesterday, a "proof of life" video was released by the real kidnappers, featuring 15 of the real schoolgirls. They are still in captivity. This is real, and it is ongoing.

Corinna Turner is hosting 9 days of prayer for the schoolgirls on Facebook. You can join here.

You can read more about "Someday" here, or purchase the Kindle Version on Amazon here.
Posted by Elizabeth Amy Hajek at 12:33 PM

Wow, this sounds so powerful! Thank you for reviewing it and spreading the word. I will definitely put it on my list to read.