So, finally got to see Ant-Man! It's funny how things morph as you grow. I still love Marvel, but I'm not as fanatical about it as I used to be. Basically they killed off my favorite character and broke up all of my favorite pairings in the same year, as well as launching the stupidest storyline ever, and I was like... "WELP." (I also got married that year and that kept me busy.) 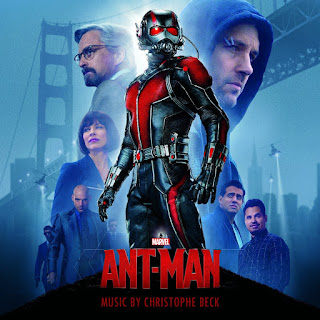 We don't watch movies in theaters because of my health issues (they give me migraines) and we wait until most movies go on sale before buying them. Sure, we rent a Redbox from time to time, but lately we've been binge watching various shows and that has kept us busy (plus we'd already paid for Amazon Prime.)

Anyhow, it took us way too long to finally sit down and watch Ant-Man... which was a shame because it was pretty fun! Not anything too surprising, but some clever uses of familiar tropes, and just well executed overall. It might not be the most original movie ever, but it was great fun. And I love superhero movies that are great fun. (Avengers 2 was heavy. Too heavy, imho.)

I think my only peeve with the film was that we didn't get to see more development with Evangeline Lilly. However, knowing that "Ant-Man and the Wasp" has already been green-lit helps, as obviously she is going to be much more central in the next film.

I LOVE that Cassie plays such a central role in the film. FINALLY a superhero lineage playing into a film!!! For those that don't know, Cassie grows up to be in the Young Avengers, and she has the same powers as her dad. I really hope that they are using this to lay the groundwork for a Young Avengers film down the line... given that they have movies planned out for the next five years, that would give young Cassie plenty of time to grow up and learn some action moves of her own.

Once again, I'm floored how Marvel can take a concept that sounds corny and make it awesome. I mean, I thought Guardians of the Galaxy was a cheesy idea and was not excited for it at all, even though I knew Marvel would probably make it awesome (and they did). I just thought Ant-Man sounded stupid, largely based on what I knew of the Pyms. (I think Janet is generally liked, at least more than Hank, but I can't forgive her for stealing Havok from Polaris. GRRRRR.)

Marvel, of course, made the Ant-Man movie marvelous, I mean, a guy who can shrink and grow at will seems crazy, and mind controlling ANTS? Wut. But it worked, and worked well. Gosh, they managed to make ants both cute AND scary. I was impressed. And I'm always a sucker for a good heist film, so that was another plus.

In terms of content... there was a tad more innuendo than in most Marvel films--more Ironman level than Captain America level for sure. But it still wasn't much, and despite the fact that Ant-Man is a thief (ahem. Cat Burgler), the film has very strong family values, which I deeply appreciated. There's action violence, but not really as much as we normally see in Marvel films. The only part that bothered me was (mild mild spoiler)  a failed particle test that reduced one human and one lamb to piles of goop. I was horrified.

Anyhow, it was a solid film of fun that I'd definitely recommend to anyone who likes superheros, heists, and family. If you have serious ant phobia, you may want to skip this one. However, I DO NOT like creepy crawlies, but I did just fine, so unless you have a really bad problem, you'll be okay.