Are you watching "Timeless" yet? If not, it's a good time to check it out! We have a week's break before the next episode airs, giving you plenty of time to catch up on the five episodes released thus far!

After the stellar opening (see my review for episodes 1&2), we got a 'meh' week for episode 3 ("Atomic City"). However, episode 4 ("Party at Castle Varlar") was fantastic, and episode 5 ("The Alamo") was just as good. So, brace for SPOILERS and keep reading only if you've caught up! 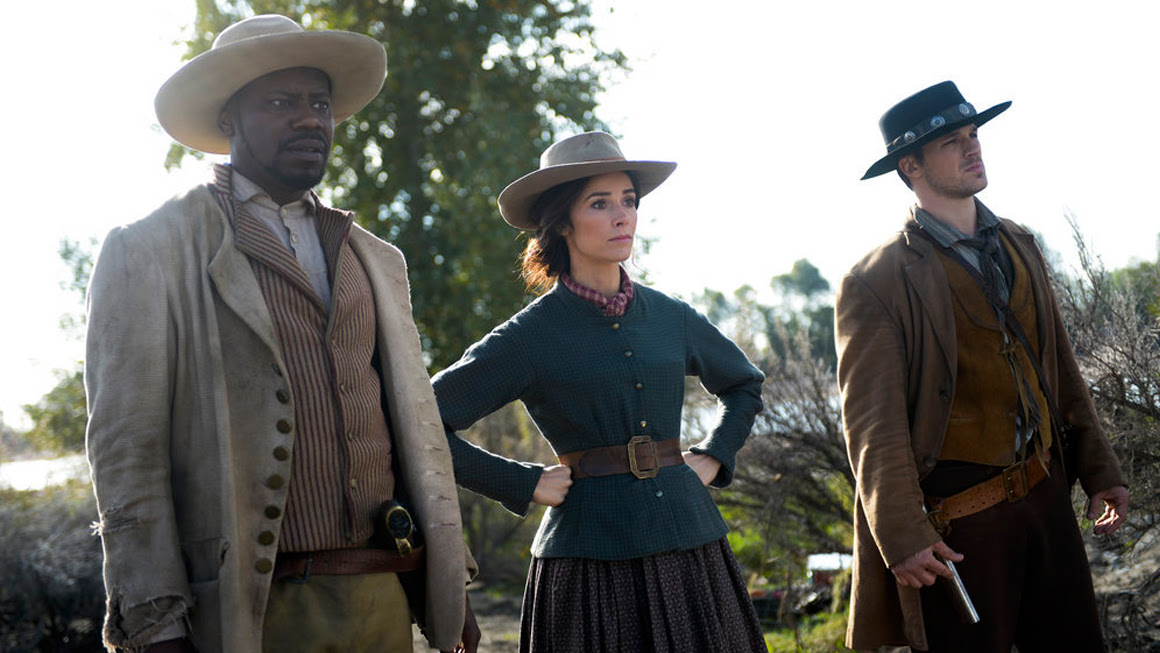 "Atomic City" was a mostly throw-away episode. There were a few good moments (like Lucy insisting on a more dignified disguise), but ultimately the most important take-away from the episode was a) Flynn has a bomb, and b) Flynn has a lifetime (and then some!) power source for his time machine.

Episode 4, "Party at Castle Varlar" also started off with a bomb, this one in Nazi Germany, however it more than exceeded the promise of the first two episodes. This time around we got good character development, and a literal James Bond adventure with creator (and real life spy!) Ian Fleming himself showing up (many of you will recognize actor Sean Maguire as Robin Hood from "Once Upon a Time"). Literally my only gripe with the episode was that amid all of the James Bond references, they never dropped an allusion to the fact that Fleming also wrote "Chitty Chitty Bang Bang." However, they only had 45 minutes and filled those to the max, so I can live with it.

Episode 5 took us back to 1800's Texas, just in time for our heroes to get caught in the Alamo. This was a big character episode for Wyatt, and honestly there was a space of time when I truly thought they were going to kill Wyatt off. It's early enough in the show that we are not so attached to him as for that to be a turn off, but it would have been a huge twist for Lucy and Rufus to deal with. But...no, of course they didn't. Ah well. The episode was still full of great things, with awesome appearances from historical characters like Davy Crockett and Jim Bowie. It was great getting to see Rufus use his brains to save the day, even if I found it a little unbelievable that Lucy's letter differed so drastically from the original.

THEORY TIME! I have two pet theories right now that have yet to be disproved.

#2 - it seems obvious to my husband and myself that Flynn has some direct connection to Lucy. We've been wondering if he was her father, lover or son since early on, and last night tilted the scales heavily in the "father" direction...but still left us hanging!

What are your theories?

We watch all our shows online, so we rarely get 'next week previews.' However, from Wikipedia I see that we have a week's break before the next episode of Timeless (boo!), and then we'll be dealing with Watergate.

Episode 7 has a title, but no synopsis. It's a bit of a spoiler (although a pretty predictable situation), so I'm not going to list it here, but rather leave a link  to the TV guide if you want to check it out.

Check back for more "Timeless" reviews, and other Geekery over at The Geek Portal.
Posted by Elizabeth Amy Hajek at 12:32 PM

I checked out Timeless after reading your review and I've been enjoying it. I was afraid that Wyatt was going to die (or be left behind) in the Alamo episode but I'm glad he didn't.

The fact that Rittenhouse was able to take over Rufus's car shows powerful they are. The fact that Flynn and Rufus dislike them illustrates how evil they are.

I've been wondering about Connor Mason and what his backstory is/what is his involvement with Rittenhouse. He seems to care for Rufus but Rittenhouse is likely funding Mason Industries or otherwise involved in it in a major way.

I think your theory that Flynn is Lucy's father is interesting. He certainly seems connected to Lucy in some way and the fact that we don't know who her father is makes it likely he is important.