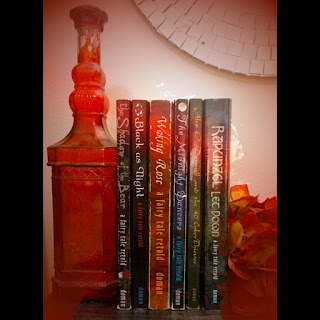 Desperate for more, I turned to the internet to find out when Doman's next book might be coming out. I immediately became an avid reader of her blog, and the blog comments. To my delight, there appeared to be a huge community of fellow Fairy Tale Novel fans out there! With Facebook in its infancy, the only way for these fans to connect was via the comment space on Doman's blog. With all comments requiring approval before posting, this was a slow and clunky way to communicate.

I'd been involved with a very successful, positive forum for several years (Narniaweb) and thought "how wonderful would it be to found something similar for these like-minded young people congregating on Regina's blog?" I had a bit of background with the proboards functionality and realized that my background might make me the perfect person to start a Fairy Tale Novel Forum (FTN Forum for short from here on out). There was just one caveat: Doman, her cast of characters, and most of her fans, were Catholic. I was Protestant. Would this be too much of barrier?

I carefully penned my first e-mail to Regina with great trepidation. It was such a long shot, and to this day I can hardly believe the gumption I had in taking the initiative, particularly at such a tumultuous time in my personal life. And yet, that e-mail may have very well saved my life, because Regina said "YES!" and I had a mission and project to pour my heart into over the next few months, a welcome distraction from the depression I struggled with.

We launched the forum at the beginning of November, 2007, and I waited with bated breath. Regina had announced the launch on her blog, and we'd carefully enacted a set of rules to structure and positive and reasonably safe community. But would people join?

To my joy, we immediately started logging new members, and within weeks I'd begun forming friendships that have lasted ten years--and counting!

As I'd believed, there were hundreds of young people out there who loved the unique elements of Doman's books and were thrilled to connect with like-minded friends. Although we all initially bonded over our affection for Rose, Blanche, Bear and Fish, as well as the fascinating plots, hilarious wit and deep faith in the novels, we soon found a great deal more in common. The forum amassed thousands of posts on hundreds of subjects--with books of all kind taking the forefront.

In the pre-Facebook days, we knew each other not by our legal names, but by forum handles. I was "Elenatintil", which no one could spell, and thus quickly nicknamed "Elena." Unsurprisingly, other forum names often featured the name "Rose", a royal title (such as "Lady" or "Princess"), or an allusion to Tolkien, Lewis, or Catholicism.

Not surprising, this group of creative and romantically minded young people quickly developed some fictional landscapes for our shared virtual community. Families were formed, with complicated interconnecting trees. Silly adventures morphed into long sages, heavily mixed with various fictional characters from the many fandoms we loved. Due to respect for our beloved author's wishes, we purposefully never brought any characters of the FTN's themselves into our fictional world. They were Regina's cast, not ours. But we waited anxiously for her next books to be released, even holding a midnight release party when "The Midnight Dancers" was published.

Yet our fictional adventures were grounded in an understanding of the real life world we all lived in, particularly as, early on, a tragedy struck some of our forum members. As our friends grieved the tragic loss of a loved one, we came together for prayer and comfort in a way that established a core of support and faith for our little community. I strongly believe that this period and the way we bonded over it was a critical aspect of how tightly the core members of our forum were tied together.

Most of us came from conservative families with cautious parents who oversaw internet activity. As such, meeting up in person did not cross many of our minds initially. However, about a year into the forum's existence, Regina and her family invited any interested fans to come out to their farm in Virginia for a week-long celebration of our friendships. Regina was known and respected in the Catholic homeschooling community, and more than willing to call and speak to any concerned parents, and this meant that the fan-gathering quickly took on the solidity of reality. Suddenly, virtual friendships could become offline ones as well. Not one, but five official gatherings were held, in various places across the US, over the next five years. Dances, murder mysteries, treasure hunts, mountain hikes, talent shows, weapons demonstrations, and of course writing workshops with Regina gave a structure to our days of connection and friendship. Some lucky folks even got previews of Regina's upcoming projects!

It was the little forum that could. A little dream, that became a network of friends. Although we all grew up and didn't have time for lengthy online discussions anymore, we didn't drop the friendships. We connected on Facebook, continued to message each other, visit each other, and pray for each other. Some people met their future spouses on the forum, and had children. Some people where there for each other during some really hard times.

I will always deeply treasure this amazing community that I was able to join. It not only provided intense emotional support and direction during some of the most difficult periods of my life, I also got the chance to direct the fan film of Regina's first book, "The Shadow of the Bear," a project that only happened due to the intense love and support of the fan community. Even more importantly, through Regina's mentorship and support, I wrote my first novel specifically as a love letter to the forum members. For we had a name for our fictional family, the German word for "Fairy Tale."

Although, technically, the forum family branched out from that initial name to include many other fictional surnames, I use that iconic fairy tale name to cover everyone who was part of the forum family. So, to my Marchens who are reading this, I love you all. Thank you for everything.
Posted by Elizabeth Amy Hajek at 3:20 PM

Elena, thank you thank you for creating the forum. The Marchens et. al. continue to be dear to my heart and memory. It has been a great place for me to make some great friends, something I found hard to do elsewhere. And even though I have met very few of the forum members in person, I still feel a strong connection to them. The forum was also a wonderful place for me to test out my passion for writing and receive feedback from other people who were doing the same. I also was able to flesh out and grow with some characters I've come to love dearly, and now I'm actually trying to adapt their stories that I wrote over the years into something that, hey, who knows, maybe I can try to publish someday (or hold on to for my own entertainment and amusement). I followed two sisters to the forum, and had one sister follow me there. She is currently a member, and I still post there from time to time. It's been a great experience of community, friendship, and support.

Yes, thank you! I met my penpal there and she is now one of my best friends. I have been able to visit her and her family three times now. We have 'known' each other for almost ten years! <3

Can you please post a link to the forum? I can't find it anywhere.

Emily, it is not very active these days, but here it is! http://fairytalenovels.proboards.com/

This is so cool to read about! I think I made a profile and joined the forum years ago, but since it was in the days when I didn't use technology unless absolutely necessary, I didn't really dive into it. I have heard so many awesome things from different people about the conversations and relationships they developed through this forum, and I am so grateful that you let God work in you by creating this space for fans of the Fairy Tale Novels!