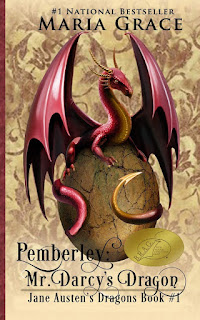 "Jane Austen but with dragons" is a premise that has potential to be terribly awful or terribly good. I'm very excited to tell you that "Pemberly: Mr. Darcy's Dragon" by Maria Grace is very good. So good, in fact, that I barely restrained myself from blogging about it before I finished the trilogy!

Elizabeth Bennet is the eldest heir of her father's ability to hear dragons. She is not, however, heir to his estate and its resident dragon. This dragon, Longbourn, is controlling and tempermental, and has directed Elizabeth that she must marry the heir to the estate so that she can stay on as the new dragon keeper after her father's death. Elizabeth has resigned herself to this fate, as the price of being able to hear dragons. However, when stolen firedrake egg is tracked to Hertfordshire, Elizabeth is tasked with helping the owner track the egg down. That owner is, of course, none other than Mr. Fitzwilliam Darcy...

Unlike similar set-ups having to do with Zombies and such, "Pemberly" does more than 'fill in the blanks' of the original "Pride and Prejudice." Although using the same initial set-up and cast of characters, Maria Grace does an excellent job of transposing them into a world of dragons and imagining how events might transpire differently. Well written, well plotted, and well executed, the book is brimming with engaging new characters and accurate expansions of the originals. Although plenty of original book dialogue is left in, this is far, far more than just "Pride and Prejudice" with dragons and there are plenty of twists that take the story far beyond Austen's plot. This is done with great respect for both the original premise, Austen's characters and words, and the etiquette and expectations of Regency England.

Beyond that, the dragon lore is quite fun and well written. It is an integral and interesting part of the book, but the worldbuilding never hijacks the story. It is really fun to imagine the estates of Longbourn and Rosings as personified by a dragon! And the smaller, companion dragons that accompany Elizabeth, Darcy, Mary, Fitzwilliam and the Gardiners are amusing and delightful additions to both plot and character development.

I especially enjoyed the expanded roles given Mary, Mr. Collins, and the Gardiners. Although I do regret the almost complete absence of Jane and Kitty from the novel, and wish more explanations had been given for why Mr. Bennet married Mrs. Bennet, I do like Mr. Bennet's expanded role as well.

Elizabeth Bennet, one of the most perfect heroines to enter English literature, is a very difficult character for another author to take up. For the most part, Grace does well with this. There are a few times when I felt that Elizabeth was 'too' perfect, too extraordinary. However whenever I felt the accolades were coming too thick, Grace usually balanced it out with Elizabeth grappling with her faults.

Well...it's not a perfect balance...but, on the whole, I'd rather have Elizabeth be a little too perfect than a little too flawed!

There are many more aspects of the trilogy that I enjoyed, but I can't share them without giving away some major spoilers! I'll just have to say that it's well worth seeing the three books through to their conclusion.
Posted by Elizabeth Amy Hajek at 1:49 PM

This sounds delightful! I will add it to my list. Thanks for mentioning it!

For what age levels would you say this is appropriate? Is it too mature for high school?

Yes, I'd consider it appropriate for High Schoolers.