Off to be the Wizard 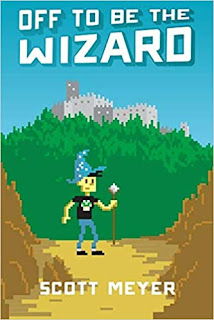 A nerdy computer whiz discovers a computer file that allows him to manipulate the world around him...and promptly finds himself on the run from the government...in medieval England...where he uses his newfound 'magical' powers to pretend to be a wizard...what else is going to go wrong?

"Off to be the Wizard" by Scott Meyer is exactly as lighthearted and whimsical as it ought to be. Although light on the perilous stakes at times and a bit slow moving at others, the constant humor keeps the reader engaged.

Actually, my husband said he'd never heard me laugh so much while reading a book. I'm not sure if this is true because I don't think this was the funniest book I ever read, but it did provoke a lot of laughs and I breezed through the six book series in about a week.

It's also a reasonably clean series. Although a little sex is hinted at and there are some off color jokes, most of the 'adult' humor is reasonably subtle. It is definitely a series written for adults, but would be acceptable for most older teens. Book 6 stars a pair of teenage twins as the hero and heroine.

I did have a few issues with the characterization of the women in books #1 and #2, (not dirty, just not well developed), but Meyer seemed to grow as a writer of females and by book #3 most of the issues were solved.

Plenty of nerd humor, a cast of characters spanning from modern day U.S. treasury officials, to the 'real' Merlin, to a female populated Atlantis, and a fun spew of different world-building gags revolving around the rules the 'wizards' set for themselves, this is the perfect antidote to the lockdown blues most of the world is currently undergoing (April 2020). Furthermore, the first 5 books are available on Kindle Unlimited, which is currently free for two months to anyone who is not already a subscriber (even those of us who have subscribed in the past).