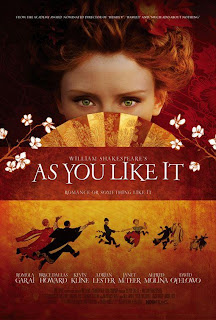 I feel somewhat duty-bound to write up a short review of this film, particularily since the major Christain review sites didn't. (I don't believe it was released to theatres, at least in the US, so that's why).

Shakespeare's comedy, As You Like It is the story of duos. Two young women, two pairs of two brothers, two fools, two pairs of couples....two devoted servants....the list goes on and on. And in all of these there is some differance in that one represents the light, and the other represents the darker side of life. Even with the young women (Rosalind and Celia), Rosalind is the one abandoned, and the one that chooses to employ the masculine disguise for deeper purposes, while Celia is merely along for the ride.

In short, one Duke is banished to the Forest of Arden and his brother takes his place. The Good duke's daughter, Rosalind, is banished, and her faithful cousin (daughter of the evil duke) runs away with her. Both girls take on the disguise of shepherds- but Rosalind wears the (rather unconvincing) garb of a man.

Meanwhile there is another pair of brothers, Oliver and Orlando. Oliver banishes his younger brother, Orlando- (who happens to be in love with Rosalind).

All of these eventually end up in the Forest of Arden, where many crazy things happen...and Rosalind teaches Orlando to be a proper lover- in the guise of a shepherd boy, Ganymede, "acting as" Rosalind.

Because this is a comedy, it does, of course have a happy ending. If, of course, you consider four weddings to be happy. Fear not, I shall not tell you whom they occur betweeen.

First of all, I must say that the premise of this adaptation is one of the more unique Shakespearean twists I've seen in years. The whole thing (originally, I believe, in France) takes place in 18th century Japan. As such we have the music, costume and scenery of Japanese culture. It more or less works, though I felt the Japanese culture could have been utilized even more in making this adaptation truely work. As such, after the beginning scenes, it felt more like a backdrop than a plot device.

The other interesting feature is the mixed race cast. Rosalind and her family are white traders/merchants, and Orlando and his family are black...I'm not sure what. I assume that they are traders as well. Then, of course, a very few supporting cast members are actually Japanese. (I was hoping that Orlando would be Japanese, but I suppose they couldn't get good enough actors). The whole premise is probably a bit jarring for those who expect a typical Shakespearing all-white cast- but those who saw Kenneth Branagh's brilliant casting of Denzel Washington in Much Ado About Nothing (like me) will be prepared and delighted by this breach of conventions.

But while Orlando was portrayed perfectly, Rosalind was less delightful. I hate to say this because I loved Bryce Dallas Howard's work in "The Village" but I feel she was rather cramped in this role. It's a difficult role because for half of the movie, Rosalind is in the garb of a man. The difficulty for any director is how to keep his actress's feminity, while at the same time portraying a convincing "man." Howard is simply too pretty to be mistaken as a man, and the lack of dirt on her face or deeping of her voice makes this even harder to believe. I'm assuming this whole scenario worked rather better in Shakespeare's time, when all the characters were played by men anyhow!

The film is rated PG and pretty much for the bawdiness of the "happy fool," Touchstone. His part is mercifully downplayed in this film, but still, it's worth skipping the scene with he and his lady love, Aubrey in her...goat hut? Definetly not for children.

Also, Orlando engages in a Japanese style wrestling match in the early part of the film, and the loincloth doesn't really cover the buttocks very well. (The scene is crucial to the movie, however, and establishes in a few brilliantly nuanced looks, the instant attraction between Rosalind and Orlando).

It is also worth commenting on the rather awkward "courtship" that occurs when Rosalind-in-disguise-as-Ganymede-the-man makes Orlando "pretend" that she is Rosalind. Nothing happens, but there's one point at which it seems like they are going to kiss...and it's just awkward when you consider that Orlando is supposed to believe that Rosalind is, at this point in the movie, a man! (However unconvincing) The ideal situation is not to dwell on this too much.

I absolutely adored Branagh's last Shakespearean Comedy, Much Ado About Nothing. It was witty, and lighthearted and just plain fun to watch. As You Like It is, at it's heart, a bit more twisted. It can be done with all the humor of Much Ado (as my college friends proved last year in a delightful staged reading!) but can also be rather...odd. It is odd. The characters and situations are rather wacky. I've never been fond of this particular play.

If you enjoy Shakespeare, or As You Like It, or Kenneth Branagh's directing (although he's not as strong here), then this is worth watching. However it is weak enough that if you don't have background with one of these, you may find yourself wondering "what is the point of this anyhow?"
Posted by Elenatintil at 8:48 AM

Thanks for the review! The movie is one of the first I intend to see when Lent is over, and I really appreciate hearing your opinion on it. We love Branagh (particularly Henry V), and the Japanese twist sounds most intriguing.

Being fans of Branagh and Shakespeare, I think we'll be able to get through it without too much confusion. Perhaps after I've seen it I can pop back in here and let you know what I thought of it?

Please do! Although, I urge you, especially if you are watching it with your family...skip the shed scene with Touchstone and Audrey!

Have you seen Much Ado About Nothing?

I personally am not one for Shakespeare films, since they seem to divert so much from the original books. I also loved Howard's acting in "The Village."

I would like to recomend "Much ado about Nothing" to you, since it is really well done, but (for guys especially) there are two parts that need to be skipped...so wait for my review!

That's what I mean, I don't remember having to skip over anything in Shakespeare...why have that stuff in the movies? *sighs*

Actually, Shakespeare is really quite vulgar in places. If I was ever going to stage Romeo and Juliet, for example, I would have to do some heavy editing to make it appropriete for my cast and audience.

It's actually kind of surprising to pick up one of Shakespeare's plays and go through it. You've heard that he's really good, and you often associate that with clean as well.

I think, however, that his vulgarity is a little more subtle than the visuals movies tend to thrust in our faces, and so not as noticeable.

Part of it, of course, is that a lot of his crude language is in the slang of the 17th century, and thus as foreign to us as another language. Reading it without footnotes (and without trying too hard to understand what is being said) you can easily miss it. But if you have footnotes- or if you are seeing it accurately portrayed on stage, it is much harder to miss.

Paul - Twelfth Night is one Shakespeare film that's too good to miss, and nothing objectionable visually for guys. Shakespeare is always bawdy, but this one does a good job.

I just love this movie! I agree... it is nicest not to think too much about the whole Rosalind-pretending-to-be-a-guy thing... :P that was pretty awkward.