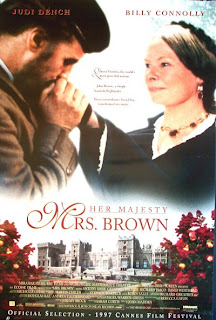 One of the many benefits of having a Netflix subscription is that after ordering one movie, the website will bring up a list of other movies that they believe you will like. That is how I discovered this little film, "Her Majesty, Mrs. Brown."

We are all familiar with the image of the widowed Queen Victoria, wearing mourning from her beloved husband's death until the end of her own life. But we do not know how her extreme mourning affected her country, nor what the men around her did to bring her out of it.

"Her Majesty, Mrs. Brown" relates the friendship that Queen Victoria struck up with her husband's former servant, John Brown. Brown, a Scotsman, is honest and blunt and is not afraid to tell the Queen what he thinks. This is exactly what Her Majesty needs to rise above her melancholy and resume her place as monarch of the nation.

This is a charming film, with a well written script and delightful acting. Dame Judi Dench does a fantastic job as the widowed Queen, and Billy Connally an equally good job as the blustering John Brown. Lovers of English history and historical biopics in general will find this an interesting and worthwhile film.

It is rated PG and is fairly appropriete, save for a brief scene in which John Brown goes for a swim in the ocean and reveals some male back nudity. This, however, is easy to spot coming and can be skipped if there are any younger ones in the audience.

Finally, as I know some of you young ladies appreciate the acting of Gerard Butler, I'll reveal that he has a small, but delightful part in this film as the younger brother of John Brown.
Posted by Elenatintil at 1:47 PM