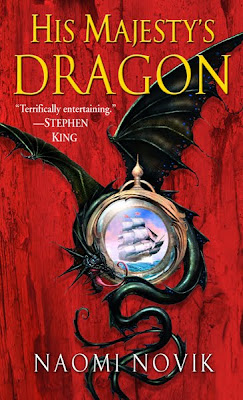 I am SO excited to finally be able to share this series with all of you! I'd been waiting until I'd read them all (or almost all, book #2 isn't owned by my library). However last night I finally finished and now I can make my report.
"His Majesty's Dragon" is, to put it simply, a fascinating blend of "Master and Commander" and Jane Austen + Dragons. It features an alternative universe where the Napoleanic wars are being fought with the assistance of dragons on both sides. Sea captain Will Laurence finds his vocation changing drastically when his ship captures a French transport carrying a dragon egg. The egg hatches while on board Laurence's ship, and the baby dragon, Temeraire, choses Laurence as his captain. Now Laurence must leave seafaring behind and journey north to take his place in the mysterious and sometimes infamous Dragon Corps.
Temeraire grows into a formidable fighter and soon he and Laurence find themselves at the forefront of the war -- and carried off into adventures that will lead them to the four corners of the globe. From England, to China, to Russia, to Africa and Australia, there's no limit to what horizon's they'll visit next.
I was blown away by the quality of the series. I'm not big on war stories, but dragons are fascinating, and Naomi Novik has envisioned an intriguing and delightful dragonic society. Most engrossing is Temeraire, who has more personality than most human characters in literature these days. He is polite yet passionate, fierce yet learned. I couldn't stop turning the pages to find out what happened next. More than one night found me staying up well past midnight to further pursue the adventures of Laurence, Temeraire and their friends.
For books designated towards an adult audience, they are fairly clean. There is some rough language in a few places, but swear words are used very sparingly. This is a story about an honorable man, raised in an upper class home that thought highly of things like duty and manners. As such, we see the book through the eyes of a man of high moral standing. That doesn't mean Laurence never fails (in the Dragon Corps people rarely marry for reasons that are well explained in the books, however that doesn't mean there are never children conceived), however anything hinting at sexual matters is handled with pretty extreme delicacy (all things considered in this day and age), a fact which both surprised and pleased me.
While the books are good enough to stand purely on the merits of the story, they gain additional depth and my appreciation by their awareness and respect of real history. Characters like Nelson, Napoleon, George III and William Wilberforce all make appearances throughout the series.
Though the books deal primarily with masculine characters (appropriate, considering the social norms of the time), there are a few female characters, including some memorable dragons and a really adorable young ensign whom becomes almost an adopted daughter to Laurence.
Final bonus? The book series was optioned by Peter Jackson, director of "The Lord of the Rings." Which means there is a chance that we may see a Temeraire film adaptation or TV series at some point produced by this beloved director.
Posted by Elizabeth Amy Hajek at 11:46 AM