Well. We have now had 5 days for America to properly welcome the season two finale of what is fast becoming everyone's favorite new TV show: Downton Abbey. Hopefully that includes all of you, but if not, go watch all of the episodes legally and freely on the PBS Masterpiece website. And hurry, they're only up until March 6th!

Spoilers from here on out. 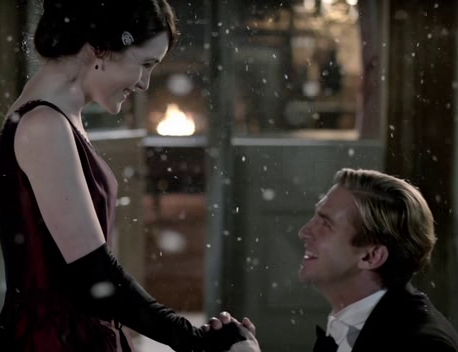 Last Sunday, prior to the episode airing, I sat down and wrote down a list of my hopes and expectations for the finale. For the most part it did fairly well, as you'll see below!


Hope #1
That we would see a solid Mary/Matthew conclusion.

Verdict?
Yes...ish. That proposal was about as beautiful, neat and tied up as we could possibly wish for. But as we know, anything can happen on TV until they actually tie the knot.


Hope #2
That Sybil and Branson would be married.


Verdict?
Yes! I was afraid they might delay the wedding in order to prolong the drama, but nope! Sybil and Branson are married and off in Ireland. Unfortunately neither characters made an appearance in the episode, a loss which was much mourned by this blogger.


Hope #3
That Sybil would announce she was expecting.


Verdict?
YES! This one actually surprised me as babies rarely pop up so quickly on TV shows, but considering the lack of birth control available in 1919, it makes perfect historical sense. It also served a good plot purpose which I'll get to in a moment.


Hope #4
That we would see Edith get some hopes and dreams for the future.


Verdict?
Poor. Yes, Sir Anthony Stallan was reintroduced as a potential love interest, but considering all of the growing up Edith has done this season, it seems they could do something more for her. Times are a changing and it seems that one of the Crawley girls should end up in the flapper crowd and perhaps even considering a career. Right now, who is more likely than Edith? Wouldn't she make a fabulous writer?


Hope #5
That there would be some good Lord and Lady Grantham scenes to redeem Lord Grantham's behavior last week.


Verdict?
Absolutely. Cora and Robert had some lovely moments discussing Mary's future and Sybil's child. Also, Lord Grantham obviously recalled his own transgression when he dealt with the truth of Mary's sordid history with one Mr. Pamuk. He was in consequence far gentler with his daughter then I believe he would have been had he learned the truth at the time it happened.


Hope #7
That we would be treated with some really solid good Anna/Bates scenes.


Verdict?
While not quite as good as their scenes from season one, Anna and Bates are nonetheless stronger in this episode than they have been all season. They're allowed to shine both together and alone. Although I first though the prison and trial plotline was too melodramatic, it allowed for some really good character bits in this episode. So hurrah for that! Here's hoping for happiness and little baby Bates in the next season.


Verdict?
Yes! I'm not entirely sure how I feel about the straight sillouette of the 1920's, however, which we see begin to seriously come into play in this episode. Although Mary and Lavinia sported the look in earlier episodes, this is the first time we see it on Cora and it looks rather odd and too youthful on her.


Hope #9
That we get funny lines from Dowager Countess Violet.


Verdict?
Absolutely! Perhaps the best was when Mary broke off her engagement with Carlisle who said he was going away for good and elicited Violet's "Do you promise?"


Verdict?
Yes! It was necessary to the story at this point, and after Isobel's shoddy treatment all season it would have been really horrible if she hadn't had at least one good moment with Matthew in the Christmas episode. Here's hoping we see some of the awesome Isobel and less of the whiny bossy Isobel in season three.


Hope #11
That there is at last some mental relief for poor conscience-stricken Daisy.


Verdict?
Perfectly executed! I couldn't ask for better for our poor little Daisy -- who finally is recognized not to be so little anymore! Also, although I was disturbed to see an Ouiji board used in the show, I thought Mrs. Patmore's little ruse to get Daisy to visit the farm was rather hilarious. Mrs. Patmore is such a brilliant comedian!


All in all, this is probably the strongest episode we've had since the beginning of the season - and thank goodness for that!


And now as the cream to finish off our dissection of this lovely confection, check out this intriguing, informative and tasty-looking blog devoted to the food of Downton Abbey and Victorian/Edwardian culture!
Posted by Elizabeth Amy Hajek at 6:15 PM

I was really happy with how this season ended up as well, and I enjoyed the little making of documentary they had afterwards too!

Yes! The documentary was an unexpected but lovely surprise! It was really fun to see all the behind the scenes stuff, but really strange to see the cast in modern clothes with street make-up on!

I love this show! I cant wait to see more of Sybil and Branson. Thanks for posting

It was a very satisfying season finale. I'm so glad it actually wrapped things up instead of leaving us with a cliff hanger. The most disturbing thing was that Thomas ended up looking good to Robert. Ugh! And after stealing the dog, too. But I have no doubt he will prove himself worthy of more negative consequences in the future. Glad to see Sir Richard given the boot, and yes, the Dowager Countess' line was perfect. And I loved how Daisy got a father and actually started having fond memories of William. And she looked so elegant (for her) at the end. So heart-warming! Good post!