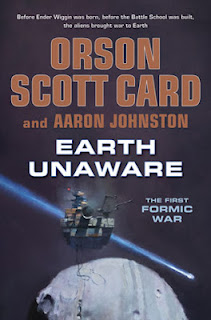 Orson Scott Card's "Ender's Game" has long since earned its place on any top ten science fiction list. For the most part, the other novels (sequels, parallel and otherwise) have been its equal though often quite different. Card's last installment in the series, however, ("Shadows in Flight") was shorter and less complex than fans were anticipating, leading to some natural disappointment.

(Don't worry, fans, SiF was just the first part of a novel so long it had to be cut in two, and it looks very probable that the next book, "Shadows Alive" will be everything we're hoping for!)

So what about this newcomer "Earth Unaware", Card's prequel to "Ender's Game" telling the story of how Earth first encountered the Buggers? With only a cameo appearance by one character we already knew, is this really an engaging read?

I went into the book somewhat skeptical, even though Card has a remarkable rate of turning out amazing books at a breathless pace. Still, the idea of a prequel dealing with entirely new characters had me wary.

But this is Card we're talking about, who can take any group of people and make them interesting because he really truly understands people. And Johnston, his cowriter, either is a fantastic mimic or really understands how Card works, because you can't even tell where one leaves off and the other begins. It all sounds traditional Card.

"Earth Unaware" begins with the human race believing themselves alone in the galaxy. Spaceflight has been made feasible for everyone, and there are colonies on the moon and mining stations all the way out to the asteroid belt. The miners are both corporate and family clans, making for a dynamic that is part wild west, and part gypsy.

Until something strange appears on the scanner of a single ship, who must fight against all odds to warn the rest of humanity before they are destroyed.

The book does an excellent job of setting up the horror of the first Formic Invasion. It also lays the groundwork for how humanity would eventually be able to defeat such a technologically advanced invader, by introducing us to military training regimen and a couple truly original minds - including one that is experimenting on what obviously will one day become the Little Doctor Device.

For those of you who just read that last paragraph and didn't understand the significance of the references, I'm going to direct you to the library. Pick up a copy of "Ender's Game" before you read "Earth Unaware." While EU takes place chronologically prior to EG, it is written so that it will be better enjoyed by the fans who read EG first.

Overall the book was better than I was expecting, and I can hardly wait for the next one to come out.
Posted by Elizabeth Amy Hajek at 4:30 PM