If you thought the new doctor looked familiar, this is why... 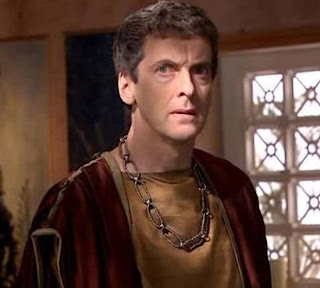 Ironically it is the same episode that Karen Gillian made her first Who appearance on. Which reminds me, this is grand old Doctor Who tradition for finding the best actors. Both Martha and Amy were on the show before being cast as regular companions. And in a country as small as England, if you rule out everyone who has already been on the show, it shrinks the pool considerably.

Of course, Capaldi did have a fairly significant role in Doctor Who's sister show, Torchwood, being one of the main characters of Season 3. However that was far enough removed from the Doctor himself that I think it will be okay. Perhaps they'll find an explanation as well...? Anyhow, he was brilliant as Frobisher on that show.

I know there are naysayers out there. But that's nothing to worry about. Remember back when Matt Smith's casting was hated? Seems hilarious in retrospect, but people were really mad about it... (it's tradition with a new doctor for fierce loyalty to the old one to emerge).

I watched the live announcement and the moment I saw his face I thought "Oh good, they went with an older actor!" This is more in tune with Classic Who which they've been alluding too all year. It also makes a strong contrast between Smith and Capaldi, and allows them to expand on the grandfatherly vibe Eleven has been giving Clara (when he wasn't oddly flirting with her...).

I'm also very excited to see how he interacts with Alex Kingston's River Song. We have no guarentees that she's returning, but I think she's met more than one other Doctor when she meets Twelve in "Silence in the Library" and I get the sense that she and Capaldi would be a smashing pair.
Posted by Elizabeth Amy Hajek at 6:45 PM

Huh! Interesting...;D I wonder how it will turn out! Although sad to hear that Matt is leaving...boo. He was a GREAT doctor.