Agents of SHIELD gets better and warrants a blog post. 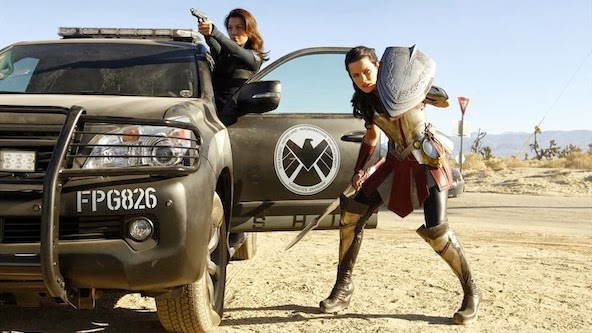 I have to say, Marvel/ABC really excels at marketing. Two weeks after the DVD release of Thor 2, Lady Sif of Asgard descends to Earth to track down the evil sorceress Lorelei with the help of our favorite SHIELD agents. You can't get much better timing than that.

Well, I was in a Thor mood anyhow.

My husband and I have watched this show together since the beginning - okay, faithfully since episode 4. And yes, the first few were shaky. The first half of the season had some really good episodes, but the overarching storyline was less compelling.

Second half of the season? This show is quickly becoming a favorite. It's more interesting, has less predictable turns, more character development (though still not enough) and an expansion into the further Marvel universe. (Mike Peterson's character is getting tied into Deathlok). I'm seriously starting to hope that we'll get some interspace/interrealm travel eventually!

The storytelling and writing is getting better as well. Nathan said tonight; "It feels like I'm watching an actual comic book now, not just a show set in the Marvel Universe."

I have to agree, and I can hardly wait to find out more about Coulson, Skye (is she Alien?), Melinda's role on the ship, and more about the mysterious Clairvoyant and GH325.

Anyhow, if you dropped off before Christmas, I highly encourage you to catch up and give the show another shot now.
Posted by Elizabeth Amy Hajek at 8:50 PM