A Look Back at L'Engle 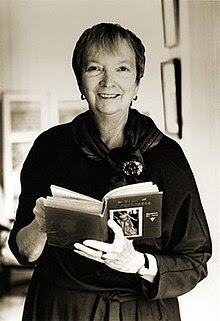 I spent the last half of September and beginning of October reading Madeleine L'Engle. I reread my old favorites, I read new ones. Every time I read her works, I read new ones, which is good because some of her books are for younger readers, and some for much older. The series grow up with you. While I could give "A Wrinkle in Time" to a ten year old, I wouldn't give "Many Waters" to anyone younger than 14 or 15. Same with the Austen series, each book is for a reader a year or two older than the last one. The reader is expected to grow up alongside Vicki Austen. I certainly have.

The very first time I read "A Wrinkle in Time" my Dad listened to it on tape at the same time. He told me "I think you're a lot like Meg Murray." I didn't really get it because that was never my favorite L'Engle book - just very weird to me, but I liked that my dad saw me as a heroine.

A few years later I got to "A Swiftly Tilting Planet" and that was probably the first true science fiction book I really read. It was weird but it was time travel and had all these interesting links between Wales and Native Americans and the most awesome rune ever. My kind of weird, I guess.

I grew into "An Acceptable Time." I need to give "A House like a Lotus" another try. I picked it up in college and the sex stuff was too much for me (I was a young freshman). After that I was more wary of L'Engle, but not so much that her death didn't hit me pretty hard. It was the first time an author I read had died. Authors were either alive or dead - they didn't live and suddenly die on you. Not until then. Then a legend passed, and I froze in front of the sign in the English department and tried to wrap my head around it.

A family friend of ours had gone to L'Engle's church in New York and had known her. So I think that added to the sense of connection. I didn't know her, but someone I knew did. She was a real person, you know?

It's fascinating to read her books because they're all set, roughly, within the same universe. Characters cross over and around. Meg Murray and Vicki Austen never meet, but Meg's daughter and Vicki date the same boy. Characters are young in YA novels, then come back as 50 years older in adult works.

I hope, someday, to give my children a new "Austen Family" novel each year between the ages of 12 and 16. L'Engle captures so well the tumultuous inner life of the creative adolescent. She doesn't shy away from the hard stuff, and her theology can instigate some deep discussions, so pacing them out appropriately is the game plan.

It was hard for me to accept, as a pre-teen who saw things very black and white, that L'Engle was Christian. Back then I couldn't wrap my mind around a Christian who believed in evolution! As an adult, I see great courage and honesty in her ability to write about belief in mainstream books. She didn't write "Christian" books, but most of her protagonists wrestled with God and Christ and Faith in some way, a way that was always honest and raw and real.

I also have a lot of respect for her pioneering work in both YA fiction, and YA Science Fiction. For a writer who matured in a pre-internet world, she wrote on a vast canvas, drawing from her own personal life which included international living and even a trip to Antarctica. She wrote what she knew, and she knew a lot! (No, I'm not saying she knew how to tesseract. I'm just saying she clearly loved science too.)

As I read her books (again or for the first time) this autumn, I realized how much her writing has impacted me. I am not entirely sure how this happened. Did it rub off on me, or do I like it because it is so similar to how I write? I suspect a mixture of both. Regina Doman writes in a similar way, and she's one of my favorite authors who is now my own publisher.

I'm not always comfortable with everything L'Engle writes, but I think it is a good kind of uncomfortable-ness. I may not love every one of her books, but the ones I do love, I love very much, and the ones I don't love, I usually at least enjoy and respect.

(A comment made me realize that I didn't explicitly say in here that her adult books do feature definite adult content, so stick to the YA books if you're concerned about that.)