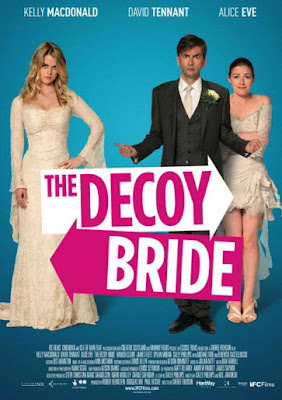 Oh no. Wait. That's Doctor Who. This is the Decoy Bride. They both star David Tennant, but only one of them involves time travel.

The Decoy Bride includes plenty of hidden references to Doctor Who, though, and fans of the show will love seeing David Tennant's adorableness in a romantic comedy. Also, fans of Pixar's "Brave" will also be thrilled to see the voice of Merida in the flesh - as Kelly MacDonald plays the leading lady opposite Tennant.

But what if you're not a fan of either? Why should you watch this little low budget rom com? Keep reading.

In the North of Scotland, there is a little windswept and waterswept island called Hegg which no one ever goes too. It is populated by 75 people, most of them senior citizens, and all of them married save for 30-something Katie Tyler, a struggling writer who has just returned to her childhood home after being dumped by her musician boyfriend.

Meanwhile, back in civilization, there is a movie star marrying another writer. Lara, the darling of Hollywood, has been stalked relentlessly by paparazzi, including one who would terrify even Princess Di's stalkers. No matter what she does, she can not shake off the cameras, so she tells her agent that they need to go somewhere really remote where no one can possibly find them. Somewhere like that island her fiance wrote about in his book... the island of Hegg.

Cue shenanigans and romance. Although not the most stunning of films, it nonetheless carries a deeper heart and more endearing whimsy than most romantic comedies. It's about love, it's about Scotland, and it's about writing. For me it's hard to find a better mix than that, and I'd heartily recommend it to any of my readers.

The film is not rated, but any incidences of language or innuendo are very mild, and would likely have gotten a PG rating from the MPAA if it had been submitted.

Best news? The film is streaming on Netflix Instant!
Posted by Elizabeth Amy Hajek at 3:20 PM