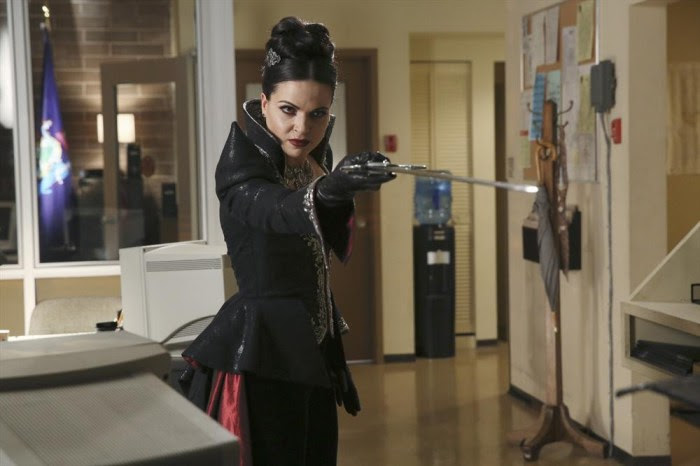 "Shattered Sight" is hardly "Once Upon a Time"s best episode - but it manages to be pretty enjoyable nonetheless. This is largely due to comedy and nostalgia. On the one hand we have some pretty funny lines... and on the other hand, we have the most poignant Ingrid flashbacks thus far. There's a moment when you genuinely wish that Emma could have been raised by Ingrid and been happy.

And then you remember 'no Henry, no Storybrooke, no Show.'

But still. Ingrid is, I think, of all the villains thus far on a show all about redemptive villians the most misguided but 'good at heart' of them all. This is why her ending was perfect - a true sacrifice that never the less brought her a happy ending. We couldn't be sad for her when she was so happy - only sad that we won't see more of her.

On the other hand, there will be quite a few fans jumping with glee at the ending of the Frozen storyline. While it had it's ups and downs (Elsa was written pretty lame, I thought), it still gave us Ingrid, and a sometimes pretty awesome Anna. (Some episodes Anna was annoying, others she was hilarious and/or badass). Anyhow, while I won't miss Elsa, I do sort of wish Anna and Kristoff hang around. We REALLY need to see their wedding, 'kay?

We can't completely ignore the over simplicity and convenience of the discovery of the letter that saved the day... but I, at least, could forgive it because, well, man that was a sweet scene. Plus the stuff taking place at the jail was pretty rocking too. "DON'T you dare wake my baby!" "What am I wearing?!?" Seeing Snow and Charming fight was both painful and kind of exciting.

What I can't forgive is that the Rumple/Hook plot was way underdone in this episode. Either their scenes should have been written stronger, or made shorter (or eliminated). As it was, it was just a rehash of what they said and did last time and added nothing to the story.

I guess I have a lot of grace for OUAT that I don't have for other shows. I'm not sure why, except it keeps doing enough stuff that I love that I can ignore most of the weak points (even if the Hook fangirls get on my nerves).
Posted by Elizabeth Amy Hajek at 4:27 PM