A year ago, Nathan and I had been dating for nine days. I was in Florida, and we hadn't yet gone Facebook official, as we wanted to tell the people closest to us in person. So we skyped, but that was it. No flowers, no chocolates, and certainly no kissing!

My grandparents took care of me though, treating me to a delicious dinner at one of the Island's fancy restaurants. I even painted my nails for the occasion. But it wasn't the same without Nathan... I'd known him two months and already I knew I'd rather be with him in snowy Minnesota than by the ocean in Florida.

Nathan and I met on ChristainMingle.com in early December. We'd both joined the site with low expectations, thinking "why not?" I'd had several people mention that fall that I ought to try online dating, and after reading a scary statistics article (committed Evangelical Christian women outnumber their male counterparts 3-2) I figured that I might as well put myself out there. After all, working at home and always moving in the same circle of (awesome) friends was not exactly the best way to meet new people.

I'd seen Nathan's profile a couple of times before I decided to send him a smile - basically a prewritten message that stated something like "Hey, I like your profile. What do you think of mine?" Since you can't give someone a real smile, wink or laugh online, dating sites have worked out these icebreakers to facilitate beginning communication. For conservatively raised girls like myself, being the first one to send such a thing is rather against our training! However I'd done research ahead of time on how to navigate online dating, and one piece of advice was that you shouldn't be afraid to initiate - while guys might be turned off by this in a non-virtual environment, they wouldn't be online, mainly because in a non-virtual environment they wouldn't approach a girl without getting an inviting smile from her first!

As I studied Nathan's profile more, I realized a couple of interesting facts. In addition to being homeschooled, he had gone to the same community college as my friend Amanda - which meant he'd lived in the same area as her until moving here. I also recognized the name of his new employer - "Fantasy Flight Games." FFG was also the workplace of my college friend Emily's husband! Coincidences... or something more at work?

Well, Nathan's first e-mail was pretty intriguing, and he must have felt the same about mine because by the time we'd exchanged five e-mails he was already wanting to meet me in person when he arrived in Minnesota (he was moving up for his job after Christmas). I wasn't ready to wait that long to see if we had any chemistry (and make sure he wasn't weirdly awkward in person!) so I pushed for a Skype call... which lasted over three hours and resulted in three more before we finally had our first offline date on January 17th, 2013.

Even before we met in person, I was getting the feeling that I could trust and respect Nathan. I didn't know if I'd fall in love with him... but I felt he'd be a really good father to my future children.

We met at a coffee shop first and the moment he walked in I knew that I could trust this man. We headed over to Olive Garden and talked non-stop through dinner and beyond... and then realized we'd better get out of there so they could have their table for more customers. I suggested that we check out the local comic book shop, a suggestion which Nathan eagerly agreed to. The comic book shop closed at nine, so we just sat, talking in the car until ten...

"Awww," my sister said when I related details to her afterwards. "Two little geeks in love!"

Nathan met my parents on our very next date, and they loved him immediately. Things picked up speed and two weeks later, on February 5th, he asked me to be his girlfriend! Only trouble was, I was leaving for Florida two days later... and would be gone for two weeks!!!

That was hard. We texted a lot. I really focused on enjoying my time with my grandparents, but I'd never been quite so eager to get back home! (our Florida retreat is PARADISE. Can't wait to bring Nathan there someday!).

I flew back home on my birthday, February 20th, and Nathan came over to join my family for supper. We made things official then... 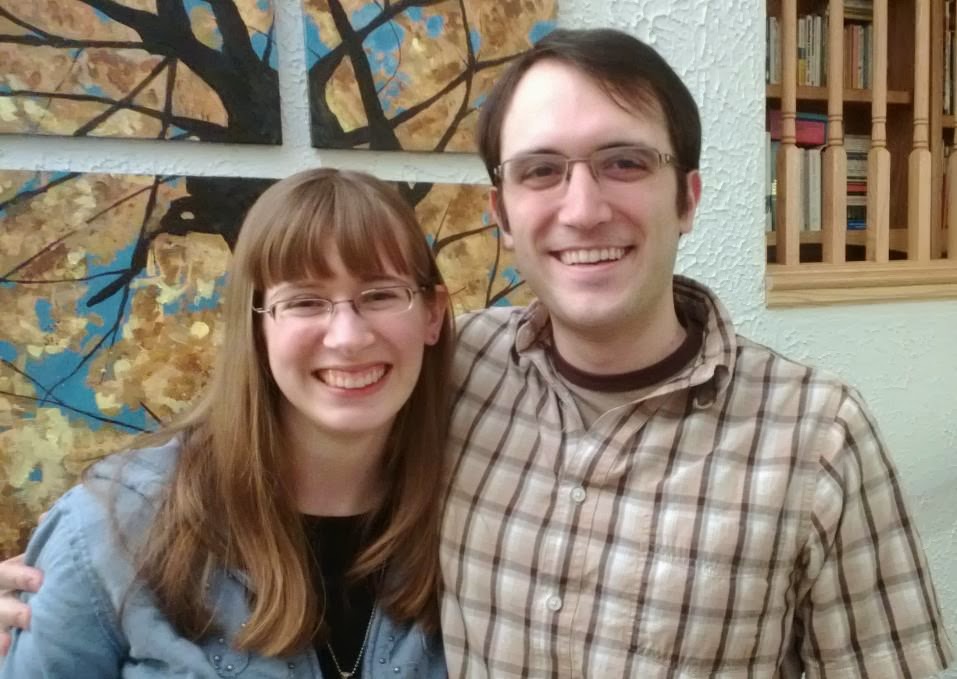 ...and he gave me custom Lego minifigs of my favorite X-Men. 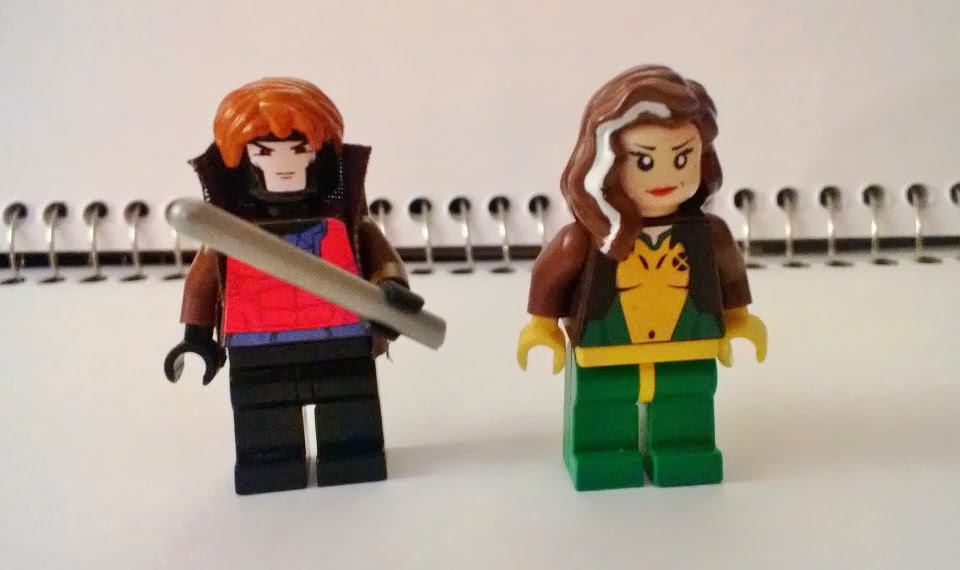 Just five months later we were cosplaying as that very couple at a local geek convention!

Actually, Nathan did originally plan to propose to me when we were at the convention, in costume, but it ended up not working out that way. Which I'm absolutely fine with - it would have been cool, but I love the way he did actually propose.

We'd talked seriously about marriage from pretty early on, and by May I was certain that this was the man I wanted to spend the rest of my life with. My family and friends loved him, and I loved his family (and they, apparently, loved me too!). So there was no hesitation when he proposed on July 16th - even if I did make him ask three times!.

And then we were married, one year after our first date. 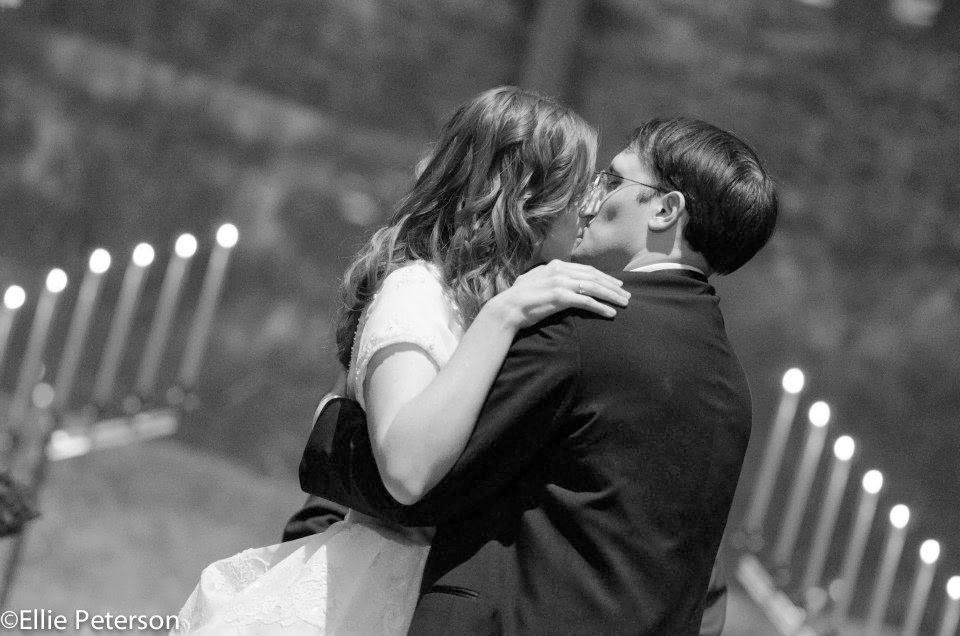 I don't regret a moment of that waiting. I know that if Nathan had come into my life any sooner, I wouldn't have been ready for him. I had to grow into the person I am now to even begin to be the wife he needed... any sooner and I would have only been the first draft of a book, full of too many grammatical errors to read!

(What do you think of that metaphor, eh? I could have gone with a sewing one... "an unfinished costume, with too many unfinished seams and wrinkles")

Yeah, the waiting was hard, really hard, heartbreakingly hard, because there were so many days when I had to wonder whether my future husband even existed at all. But now I look back on that time and see every day as God teaching us and preparing us for that moment when we first met. And it's perfect.

This is simply the loveliest of stories <3 I'm so glad you two found each other, and this is exceedingly encouraging to all those of us still waiting.
Wishing you both the very best for all the years you have ahead of you together :)

Oh, thanks for the lovely story! I enjoyed reading!