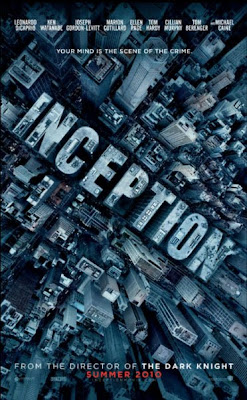 So I finally saw "Inception." It took this long because it's really hard to see films in theatres when one has to rely on finding a close-captioned version. And then Redbox didn't have it... and my friends were waiting for Christmas to get their copies. So it wasn't until January 1st that I was actually able to borrow it.

And, of course, I loved it. Well, maybe not "of course." My brother didn't (he 'only' liked it), and I would not consider myself a Christopher Nolan fan, having been put off by the other three films of his that I've seen.

But Inception is brilliant. It deals with dreams (which fascinate me), has actors I really like (the wonderful Ellen Page and yes, I do like Leonardo Di Caprio), and is absolutely top of the line in every single other category. It has action, adventure, mystery, introspection, philosophy, relationships, romance... in other words, it is a perfect genre blender, which is always my favorite kind of story.

For my the shining points were the heart and conscience brought by Ariadne which is a vital part of the film and something I think many films in this action vein could benefit from. Without weighing the story down, Ariadne and the Mal/Dom problem brought a reason for the action, a reason for the audience to become emotionally invested and gain something from the story.

I also loved the sequence when Ariadne is designing the dream world. I tend to do that sort of thing myself in my dreams, although my changes of color and location have less sticking power than hers. (What is her secret? I neeeeed to know...)

I'm sure fans of the film would love to see me go into all sorts of details regarding my hypothesis regarding the ending and such... and I'd be happy to answer any questions or discuss speculation in the comments. But not here. Because what I've really been thinking about is why Inception has done so well, and why nothing like it has been made before.

Well, most of us do. There are exceptions to this rule, but generally I think it's safe to say that the majority of the world experiences dreams when the fall asleep at night.

Dreaming is also a fairly popular topic of conversation. I couldn't even begin to count the number of times weird, poignant and just plain hilarious dreams have come up when talking to friends. It's a surefire subject that everyone can join in on.

And, let's face it, dreams are just plain interesting. While same may be far too confusing to make any sense, many of us have woken up going "that was a really interesting story... I should turn it into a book or something..."

(In fact, Stephanie Meyers did. But that's another story.)

So when I consider this, it's really not surprising that a well-made movie about dreams became one of the most popular and discussed movies of the year. What is surprising is that no one has ever done anything like this before. I'm going to guess that the most limiting factor was the CGI component, because something on this scale could not have been attempted a decade ago.

The other limiting factor, however, is probably studio approval. "Inception" is an incredible daring, edgy film that fits far better on Art House and Independent shelves than mainstream. If Christopher Nolan hadn't knocked out so many successes in recent years, there is no way he could have gotten approval. But after "The Prestige," "Batman Begins" and "The Dark Knight," he's won a trust that few filmmakers ever get.

In fact, the last really big film we got of this sort was "Eternal Sunshine of the Spotless Mind." That was a brilliant but mind-boggling film that was rather less accessible (both because of format and mature content) than "Inception" and made a much smaller splash.

"Inception," however, has been unmistakably big. It was the only film that could truly be called "adult focused" that make it onto the list of top ten grossing movies for 2011. And there's a lot of talk that it'll be a serious contender for Best Picture. Will it? Debatable. The Academy strongly dislikes giving it's awards to anything in the fantasy/sci-fic realm, and such films are usually happy just to be nominated, or at best win a special effects or sound award (Return of the King being the ONLY film of this category EVER to win best picture).

But we can always hope, right?
Posted by Elizabeth Amy Hajek at 7:51 PM

Quite so! I've my own musings about the particulars of what happened in the end, but they're secondary to watching the primary core of the movie, which I found to be very fascinating. That is, the character of Cobb himself.

Incredibly interesting to watch him struggle with his, well, faith in the trappings of the world. In the end, he doesn't seek to find reality in his physical surroundings, but in humanity.

Which, if you want to stretch things a little, is one step closer to faith in God, since we are made in His image and likeness.