The Mr. and Mrs. Darcy Mysteries 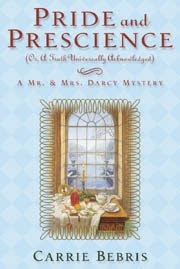 What if the newly married Mr. and Mrs. Darcy found themselves falling into one mystery after another? What if their sleuthing, wit and comraderie was reminiscent of "The Thin Man's" Nick and Nora? What if they not only solved mysteries within the cast of "Pride and Prejudice," but also ventured through the covers of Austen's other novels? What if I wasn't simply saying "What if..."

Guess what? I'm not. This is indeed the premise of Carrie Bebris's "Mr. and Mrs. Darcy Mysteries" which begin with "Pride and Prescience" and have continued on now for five volumes.


Pride and Prescience
The wedding's over and Darcy and Elizabeth are off to -- nope. No honeymoon. Instead mystery and murder sweep them away as newly-married Caroline Bingley starts acting very, very strange... is she going mad, or is there something more sinister at work? It's up to Darcy and Elizabeth to find out!

Suspense and Sensibility
Kitty Bennet is being chaperoned for the London season by her sister Elizabeth. As luck would have it, she quickly wins the heart of the rich and handsome Henry Dashwood. All seems ready for a happily ever after, when suddenly Henry's clean-cut demenor vanishes and a darker personality comes to the forefront. Darcy and Elizabeth investigate again, this time with the help of Elinor and Edward Ferrers.

North by Northanger
Elizabeth and Darcy are vacationing in Bath, when they recieve an invitation to visit an old friend of Darcy's mother at Northanger Abbey. But is Captain Tilney all he seems? Why is Darcy being framed for theft? And does their only hope really lie in Lady Catherine de Borough?

The Matter at Mansfield
Elizabeth is all set to encourage Anne de Borough to take independance and begin dancing at balls... when Anne surprises everyone by eloping! Darcy, Elizabeth and Colonal Fitzwilliam must track down Anne and the mysterious Henry Crawford... but what will happen when an accident strands them all at Mansfield Park?

Intrigue at Highbury
Elizabeth and Darcy are passing through the town of Highbury, when a highway robbery forces them to stop and seek justice. Turns out Emma and Mr. Knightley have a mystery of their own, and the two couples must join forces to solve the matter of the Gypsies and the Churchills. And along the way, Emma just might try her hand at matchmaking again!

After wading through countless volumes of shameful Austen spin-offs, this series was a breath of fresh-air. Well written, fairly true to Austen, and with engaging plots I found I could easily count it as the best Austen sequel work around.

I read the series completely out of order, so I can honestly say that it's possible to just pick one up and start reading. In fact, I advise Jane purists and younger readers to skip the first two, as both mysteries deal with supernatural elements (and the second contains allusions to more mature content). The later three are nearly completely free from anything more than the hint of a ghost, and I do recommend them very highly.

I have only two regrets about the novels (apart from the annoyance of the Indiana Jonesque supernatural bits in the first two). #1, that Catherine and Fanny don't ever actually make appearances, and #2, that I have to wait for #6 to come out!

UPDATE 8/26/2015 - After the release of Book #7, "Suspicion at Sandition" (which was excellent, as was book #6), I decided to reread the series. It is just as good the second time through, and actually this time I enjoyed the supernatural elements. I guess I just wasn't prepared for them before, but with advance notice I was able to appreciate them as good stories.
Posted by Elizabeth Amy Hajek at 9:10 PM