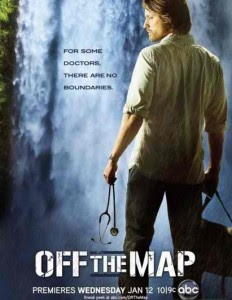 It's show premiere time again, and there's some interesting new concepts popping up this year. I haven't been able to watch "The Cape" yet (Hulu hasn't captioned it for some odd reason) but I did check out ABC's "Off the Map" yesterday.

"Off the Map" is a medical drama with an interesting new twist -- it's set in South America. It revolves around a team of doctors dealing with the difficulties and shortages of practicing medicine in the jungle. Three of the doctors are old timers who know the ropes and can use coconut milk effectively to save surgeries gone wrong. The other three are newcomers who have just finished their residencies at home in the US and have come to the jungle to seek adventure... or to escape problems at home.

Episode 1 introduces us to all the characters, allows each of the newcomers to confront their own case and difficulties, and hints at deeper secrets on everyone's parts.

Although it is clearly an ensemble cast, two characters stand out as ones I know I'm going to enjoy watching. First is Lily Brenner, a eager, clean-cut young woman with a strong work-ethic and joyful spirit -- yet a tragedy in her past. Secondly is the rugged Ben Keeton (played by Martin Henderson, star of "Bride and Prejudice") who runs the staff with an iron hand and seems like he should belong in an adventure movie, not a medical clinic.

Content-wise it looks to be squarely PG-13. There is some innuendo, but it was much more veiled than I've come to expect from such things. Younger viewers would probably not even catch on to the subtext. However I wouldn't recommend this show for family viewing because it is a medical show and isn't shy of showing pretty gruesome wounds (episode #1 includes a victim with his arm stuck in a zipline and it is hard to watch if you're not used to that sort of thing). I'm not a gore person so I did find myself cringing at a few parts. However other than that, the show seems really promising and I look forwards to next week's installment!
Posted by Elizabeth Amy Hajek at 3:36 PM

Huh, interesting. If I only had more time....

I've seen the first two episodes of the Cape. Don't expect anything too grand, but it's a very entertaining show. It does a good job of not taking itself too seriously.

(There's also a number of fairly obvious Batman homages, but I think I'm cool with it.)

The first episode is ridiculously rushed, as it tells an entire origin story in 45 minutes. But the pacing improves in Episode 2.