Once Upon a Time Snow White's Mother Had Issues

Guys, OUAT has picked back up with latest episode "Bleeding Through" (3.18). Hold on because past, present and future are about to get muddled - and spoilerific!

Last season we learned that Snow White's mother was a bit of a witch with a b - and in last night's episode we saw her as more than a spoiled brat, but a girl who would destroy another woman's life to get what she wanted.

And that woman happened to be Cora, now forced to give up her own child as a result of Eva's tattling, and therefore embarking on a life of revenge that would cause their daughters to - well, travel to a whole 'nother universe. 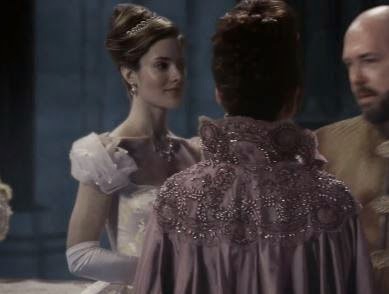 That's the short story, but the long story is still more interesting. Cora appears not as a saint herself, she's scheming and willing to lie, but chances are that if she'd gone ahead, married Leopold, and raised Zelena, things would have turned out okay. For her and Zelena.

Of course, nearly every character we know on the show would either not exist or be totally different, so the stakes are really upped now that Belle has discovered Zelena's true purpose - to cast a time travel spell and change history, with an earlier murder of Princess Eva, Snow's mother.

While I felt the Zelena scenes in this episode were weak, nearly everything with Regina or Cora was strong, especially the scenes with Regina and Belle, and Regina and Snow. Oh man, Regina and Snow - that was a long time coming but so beautiful. What a relationship arc there!

Another relationship just exploded into reality - we finally got a Regina/Robin kiss and boy was it passionate! Can't wait to see where that leads! The scene where Regina forgave Robin, saying that nothing was worth the death of a child, truly shows what a path Regina has come down and how far she's changed.

Emma wasn't doing much this week, but her little spurt of gleeful magic practice was pretty cute.

Hook of course is taking advantage of another chance to be extra brooding. He didn't seem too keen to have Cora show up again, as I'm pretty sure he kicked the table on purpose. Which seems a bit silly as he should want Zelena defeated as much (or more!) than anyone.

As might be expected, I was also pretty excited by the appearance of some new dresses. Check out my excitement over OUAT's obsession with beads.
Posted by Elizabeth Amy Hajek at 12:03 PM

Interesting! I gave up on blocking out an hour on my Sundays to watch OUAT...I figure I'll catch it on Netflix.