The Power of Cinematography 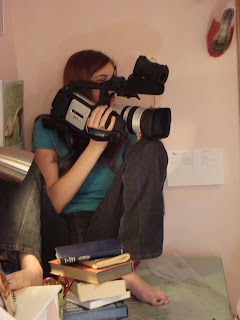 When the first film was made, cinematography was very simple. They set up a camera at one end of the room and acted out the entire scene in one wide shot. In short, it wasn't much more than a filmed play and the cinematography reflected this.
A few years down the road D.W. Griffith's released his "Birth of a Nation" and suddenly the camera became an active player in the story. Close-ups, and shots of objects came into play, drastically changing the way the story was told.
In fact, Griffiths declared at the time that film would allow us to see history objectively, as we'd be able to "watch" it ourselves and make our own judgement. And yet the very opposite was really true. Film showed us a biased view of history -- whatever the filmmaker wanted to show, and the camera was an important piece of that.
Because cinematography is far from objective. It shows us what we are meant to feel by what it focuses on. Is it a wide shot, showing the hero as a tiny speck against the background? In a break-up scene, does the camera focus on the pain of the person doing the breaking up, or the reaction of the listener? (look how your sympathy changes depending on the angle choice!). Is the camera placed high, giving the characters a feeling of smallness and insignificance? Or is the camera positioned low, making a character appear powerful or menacing?
Is the camera tilted, giving the world a feeling of being off? In "The Third Man" nearly every angle is some sort of tilt, highlighting the theme of the story which is that something is not quite right, something is missing.
What about the steadiness of the camera? Is it smooth and romantic, flowing gracefully between actors as in the 2005 "Pride and Prejudice"? Or is it hand-held and gritty, giving almost a documentary, realist feeling as in Joss Whedon's "Firefly"?
I would have to say that my all time favorite cinematography can be found in the 2005 P&P. It's graceful, lyrical, poetic, romantic. Every shot is chosen carefully to convey a very specific meaning. It's like a series of paintings, yet never looses it's sense of realism that makes the story so incredibly personal.
So let's celebrate the wonder of cinematography! I just put up the poll for "Best Cinematography" at this year's Academy Awards. Hurry up and get your vote in before it closes!
Posted by Elizabeth Amy Hajek at 10:38 AM

I took a class last semester which touched on film noir, and cinematography is major in that genre. Or, rather, it's very specifically used. Jilted angles, chiaroscuro, even intense closeups at times.